A Matter of Time 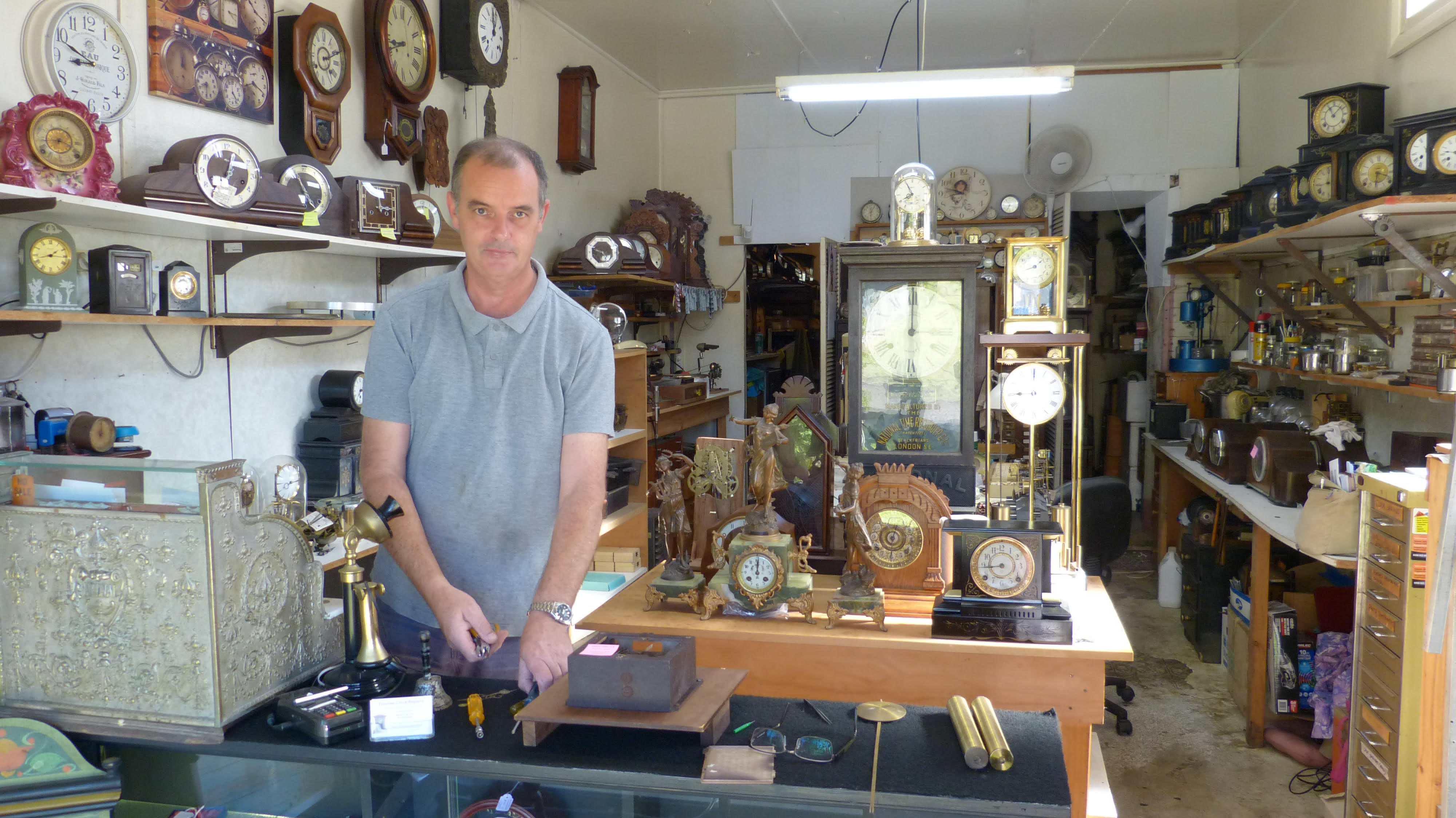 If you’re in a corner of Tinonee by the river at midday or midnight, and hear a clutch of cuckoos, bells and chimes . . .  it’s just Darren Bird’s nest of amazing collection of clocks and watches.

Darren has now opened the charming The Tinonee Clock Repair Shop, returning to his first fascination as a young boy.

Darren, who has spent all his life in the Manning area, used to spend weekends and holidays with his uncle when he was a young boy, watching him repair the intricate mechanisms of watches and clocks.

‘My parents had a dairy farm at Karaak on the other side of Wingham on way to Mt George,’ said Darren. ‘The clocks always fascinated me, but it wasn’t till I was around 16 or 17, that  I got seriously interested in the skills involved. But my great passion was cinema.’

He worked in local cinemas for a few years, and nurtured an interest in the second-hand industry, as his home attests, filled with quaint and interesting antiques and old wares.

Then, when he learned that the old Taree Cinema that was the Savoy and then the Boomerang cinema which had closed down in the early 60s was selling off their equipment, he bought it. So, what does one do with a lot of old movie theatre equipment?

Open your own cinema, of course.

Darren started the Tinonee Terrace Cinema about 20 years ago on a part time basis. Then, about eight years, ago opened it on a fulltime basis with his partner, Gordon Hopkins.

It became a great tourist attraction for Tinonee and the surrounding area, and is now sadly missed. Many locals and visitors, who came specifically to go to the Terrace Cinema, remember tea and sandwiches, or cocktails and hors d’ouevres being served in the gardens before going into the 22 seat cinema off the verandah of their cottage. Red velvet seats and plush curtains and a lot of movie memorabilia all added to the charming atmosphere. They screened vintage, contemporary and art-house films. Sadly, they had to close about two years ago.

‘Council made a lot of demands, due to a rather recalcitrant then-neighbour, and the insurances were adding up, so it all got too hard,’ said Darren. ‘It was just a small rustic setting at the end of a dead end road, overlooking the river, we couldn’t start dealing with paved parking lots and stuff as though we were in a city!’

Sadly, tourists still come looking to visit the Terrace Cinema, but the equipment has been dispersed to other collectors.

Tinonee Clock Repairs is now a thriving business, tucked away in a little cottage by the river, in Tinonee. He has a collection of close to 200 clocks, which are for sale, some he’s bought at auctions ‘round the country, or people bring them in to be sold. If you buy an antique clock, Darren will make sure it’s in tip-top running order before it leaves the store. The oldest clock in the collection is a nine-feet-high French Morbier grandfather clock dated 1744.

‘I just love clocks, I always think of them as the heartbeat of the home’, said Darren ‘And bringing them back to life is special. You get something that’s neglected, seized up, full of dirt and dust, knocked around and you rejuvenate it, revive so it’s working again which it gives you a great sense of satisfaction.’ 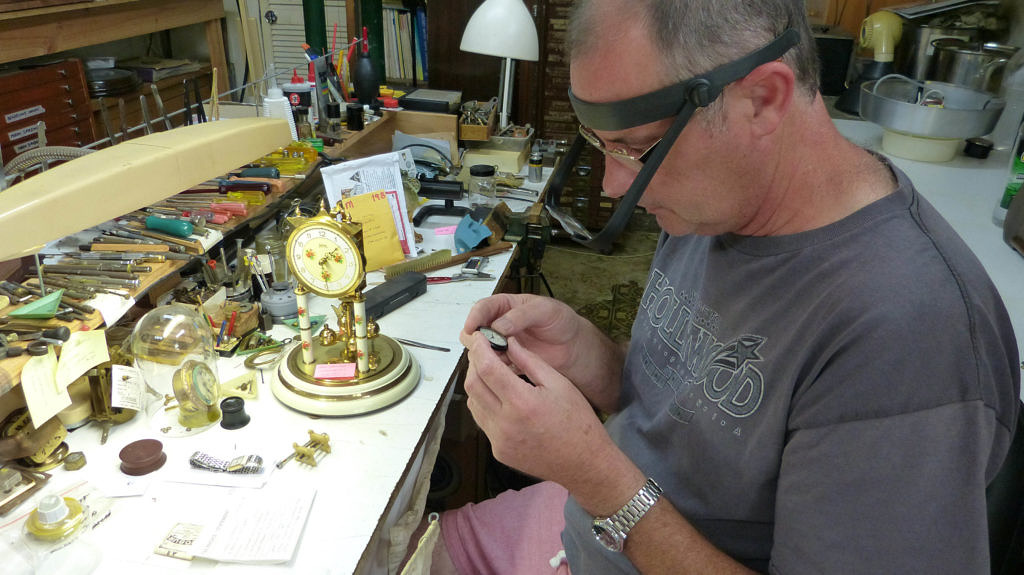 It’s fascinating to wander among Darren’s clocks in the shop… from the early manually-wound watches to the automatic movements of the 1920s (where your arm movement “winds” the watch), to the accuracy of the quartz movement. If batteries offend your sensibilities, Darren says there are still lovely mechanical watches being manufactured. ‘Though I tend to specialise more in the vintage watches,’ says Darren.

‘I suppose a lot of old clocks have been ditched as being useless, which is sad. But I’m finding now that the younger generation are wanting grandma’s old mantle piece clock repaired or grandpa’s old wristwatch fixed. Now the 1950s star burst clocks, and early electro-manual (?)clocks are popular at the moment. Mechanical pieces have always been a fascination of mine. I’m restoring a beautiful Swiss music box at the moment. I’m a bit stunned at how successful this little business has become. People are sending and bringing clocks and watches from Sydney to Brisbane.’

I guess the old adage ‘don’t throw anything away, what comes around goes around’ applies.  But if you visit Darren, try to make it at midday. 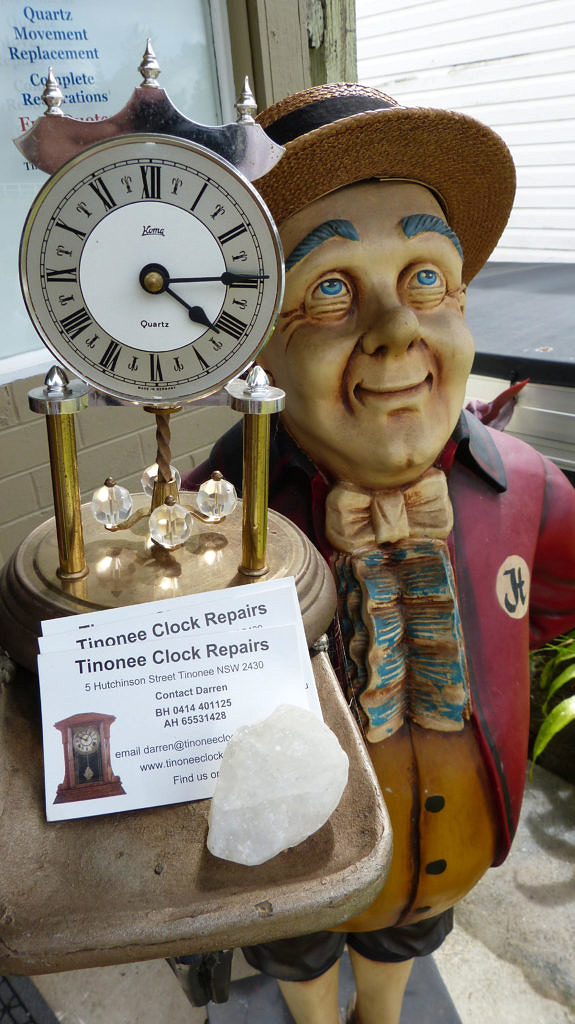