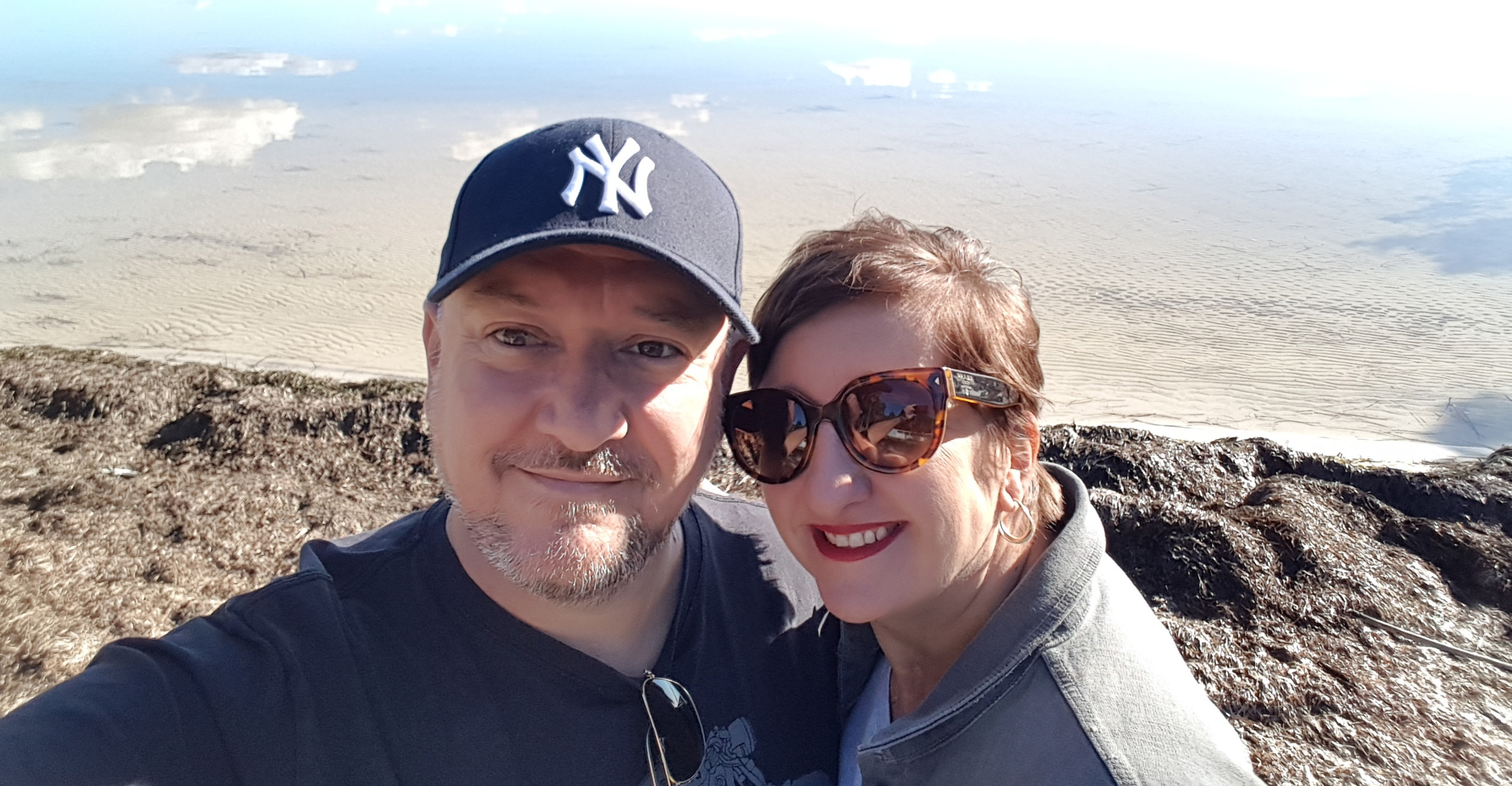 Morgan Stewart, CEO of Club Taree Golf Club, is a shrewd businessman who has embraced women as his prime customers. He is also a White Ribbon Ambassador.

The White Ribbon campaign began 26 years ago in Canada as a response to the massacre of 14 women. It is a men-led movement to raise awareness about men’s violence to women. It began in Australia in 2003 to encourage respectful relationships with women and gender equality. Ambassadors and advocates of White Ribbon work in the community to help raise awareness to end men’s violence against women.

‘My father was a policeman in a smallish town in New Zealand and was an alcoholic, so my brother and I grew up in a pretty turbulent household where we took the brunt of what was happening between my parents. Because of the things I saw, and those experiences, I made the decision early on not to be like my Dad. He was an example of what not to be, so I thought as long as I didn’t turn out like him, I’d be okay. So I decided to be one of the good guys.

‘I’m the oldest of three, I have a sister between me and my brother. And there’s no doubt my brother feels as I do. I haven’t spoken to my father since 1999 and I don’t think my bother has spoken to him since 2001. We realised our father is the antithesis of everything wrong in a parent, or a role model. So we made our choices, maybe subconsciously, in that when we got out into the adult world we just decided to be good blokes. To try and have healthy relationships with women, with each other, and not be tainted by what had happened.

‘When my mother separated from my father, we were still young kids, so we went off to start a new life only about five streets away but we never really saw him. He didn’t pay my mother on time, he didn’t do a lot of things he should have, but she finally had the courage to make a move and get away from him, and my grandmother, her mother, supported her in that. She supported my mother to buy a car as my father never did support her, and helped my mother in many ways. My grandmother is a very powerful woman in this equation. She again supported my mother when she purchased a house, mum paid her back, but it was my grandmother who took us for holidays to get us out of town. It was my grandmother that got me into golf actually!  She used to take me along to Ladies Day at her club and I’d caddy for her. And when we got round the back of the course she’d give me a private lesson and let me knock a few balls around! That’s how I fell in love with golf! So when I say I’m a man raised by women, that’s generationally as well. My grandmother was the enabler for my mother, like the aunties and grandmothers so often are.’

Morgan and his wife Annette have a 21 year old daughter. Was he tough on who she brought home?

‘My wife and I have tried to show her what a healthy relationship is, teaching her to be independent, be educated and don’t rely on anyone, man or woman. Just be yourself, have a view, be able to support that view articulately, and realise there’s that cut off point where people just get lost in their own passion and mis-information. So don’t try and convert the unconvertable, but have a voice and a view and be prepared to stand behind it.

‘I’d been looking for Associations and places where I could lend a hand or a voice, and I secured a very senior at Blacktown Workers Club when we were living in Sydney. The guy I worked for was a White Ribbon Ambassador and there was a fund raising exercise underway and I was introduced to Detective Superintendant Gary Merriweather and Gennelle Warne from Blacktown Police, local area command. Gary supported Genelle in increasing the police at Blacktown to four full time people to put resources behind the team as Blacktown had ten to  twelve Call Outs a day, every day, the second highest  in NSW, maybe the country, for incidents of domestic violence. Given its relationship to alcohol, that’s alcohol that’s consumed in the home, which can lead to issues, was something I well knew. You can go into liquor outlets and buy several cases of beer or wine and they welcome you. So Blacktown decided at that time to withdraw from the take away wine and beer places and shut down the bottle shop at the sports club and put the price point at the main club as we didn’t want to contribute to the problem. We didn’t want people to buy alcohol at the club then go home and drink it and have other matters occur in the home.

So here, if you come into our club and knock back three beers, we’re looking at you.

At Blacktown it was a conscious decision the club made   to do some fundraising for, and in partnership with, the Police LAC so we ran the bike ride from Newcastle to Sydney, and altogether we’re raised about 100 to a 150  thousand dollars to date. The money was going directly to Blacktown Women and Girls’, The Washhouse in Blacktown plus the River Cottage in Windsor with a percentage of the money going to White Ribbon. We were using the White Ribbon as the opening gateway to talk to people about domestic violence but the funds were going directly to local charities doing the work on the ground.

‘So that’s the model I use here in Taree, every dollar that I raise we try to use locally. A percentage goes to White Ribbon, almost like a fee and I pay homage to them, but I send the bulk of the money we raise to Taree’s Womens Centre and Refuge because I know they’ll use it locally. The Womens Refuge is the primary point of contact for women to be cared for and supported in a time of crisis. I’d rather see the money I raise go directly to one place to make a difference locally rather than spread around ten different ones.

‘It may be a little old fashioned but there’s a controller of discretionary spend in a household and that’s generally not the man. So the discretionary spend market is where we have focused Club Taree. You don’t have to come to the Club, you choose to come here. After you’ve paid your bills you can choose anywhere to spend your money, so we hope it’s with us.

‘So we market, promote, fit out the Club, aimed towards women. The food we offer, the style of furniture, the atmosphere – even down to perfume in the air conditioning,  the type of product we offer, the type of cars or promotions we give away, are all geared at experience and quality.… not trying to deliver a five dollar meal to a thousand people, but deliver a genuine price point at $20+ and plan that 300 come.

‘Women are our key customers. The future plans of the Club include building a child activity centre, plus the type of food we’ll offer in the club in the next few years, are all geared strongly at women. I joke that men will play golf and then sit on a milk crate in the sun and drink beer as long as the glass is cold. Generally they just want cheap beer and cheap food, whereas with women, it’s a very different proposition. It’s a lot more colligate, it’s about a sisterhood. For example women’s golf is vastly different to men’s golf. Men’s golf is about me beating you. It’s competitive, ego and testosterone driven. Women’s golf is still competitive, but predominantly about women getting together for fun and a social outing. If women’s golf decided to invade and take over a small country there’d be a committee, everyone would know their job, be at the airport on time, ready to go! The men would still be sitting around waiting to find out who’s going to give them tickets to the first committee meeting to be held next month. Women are a lot more organized. One of the senior golf women once said to me “Women are like teabags, you don’t know how strong they are till they’re in hot water”.

‘We should get more women to play golf, because that’d be great for women’s golf. I’ve been around sport my whole career ; basketball netball, rugby league, soccer, you name it, and always women’s sports are the most organised, well structured and easiest to deal with, and that ethos is what I have brought to the business. It’s not about me having the biggest car spot closest to the door, or the biggest office. It’s about; Is our club the biggest and the best it can be? And the things that we do, we ask is that going to be what’s best for the club and our clientele? It’s not, is it something I want, but is this something WE want? That’s where I think the alignment towards women and women’s sport is probably its most tangible.  It’s not about me, it’s about us.

‘Now domestic violence is talked about more often, and that’s the key to it. When women need help, they call the police. It used to be the attitude, well it’s a lower socio economic problem, well that’s rubbish.  People in the posh areas of Sydney or anywhere, have issues with domestic violence, they just deal with it through solicitors very swiftly and quietly.  It’s about resources, not a socio economic disadvantage. If a woman is in trouble and has an opportunity not to call the police but deal with it through other means, then they do. I think Rosie Battie, whom I’ve met a few times, is a phenomenal lady and has helped raise awareness and taken away some of the stigma.

‘Changes are happening, all of these things are good, but the next step is for women not to be required to be cross examined in court. If they can appear by video link, then to my mind there’s no reason her evidence can’t be accepted when it’s taken lawfully by a police officer at the scene of a crime. That should be it. More people talking about this is good. I see my role as a White Ribbon Ambassador is not being a white knight, or roaming the streets like a vigilante. However, the Club is open late at night, we are well lit, we have security presence and we have lots of CCTV plus we have reporting and compliance relationships with the local police. If a woman ended up at the Club and needed help, we’d help her. Whoever walks in the door, for whatever reason, and we get people from all walks of life here, we try to help.

‘Sometimes people need a helping hand for one thing or another. Help and support is not necessarily solving the problem, but redirecting and providing assistance where we can. We’re just trying to be good guys in the community.’