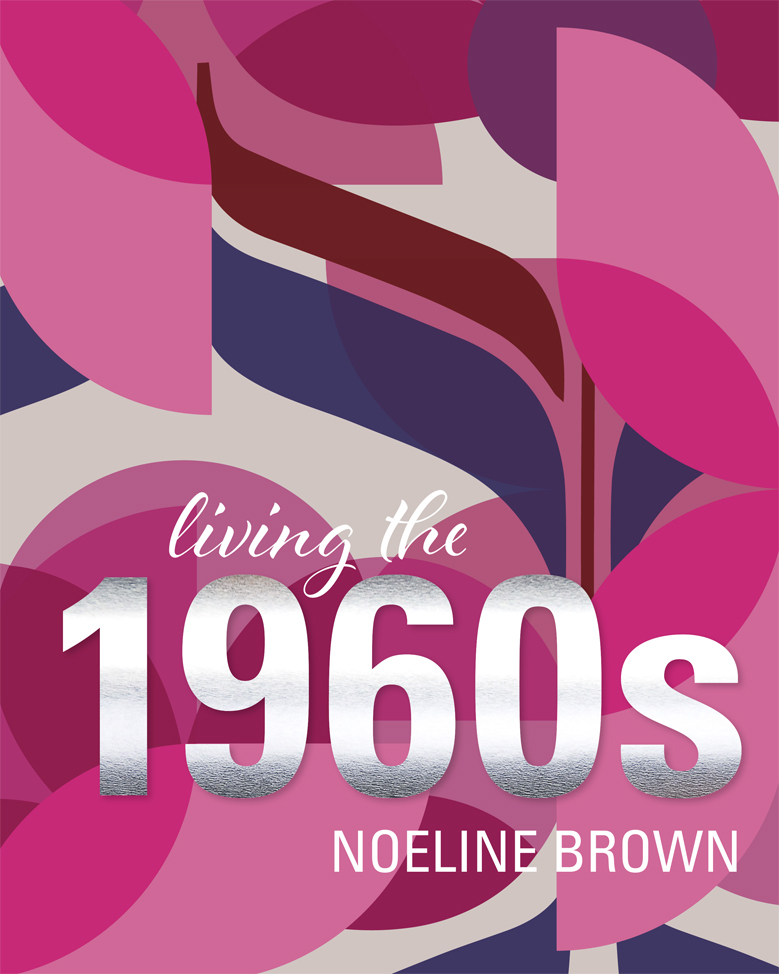 Noeline Brown
Published by the National Library of Australia. Rrp. $39.95

The sixties was a decade of safari suits, shift dresses, Capri pants and droopy moustaches. Of multipurpose French onion soup, junket, tripe and Bloody Marys. Of success on the world’s sporting stage and social and political stirrings at home, as Baby Boomers and their parents began to see the world differently.

Containing more than 160 images, and combining entertaining social history, fact boxes and lively anecdotes, “Living the 1960s” paints a picture of a decade that didn’t just swing; it twisted, stomped and screamed.

Award-winning and much loved actor Noeline Brown cut a groovy figure in the sixties. For Noeline, as for a generation of Australians, it was the most important decade of her life. She confesses in “Living the 1960s” that she: ‘Was a bit of a snob…I preferred to listen to jazz and performance poetry, to appreciate the lyrics of Bob Dylan and watch foreign films. I wore a lot of black and dramatic eye makeup, and frequented windowless coffee lounges where people smoked heavily and played chess’. When she caught sight of The Rolling Stones in Sydney’s Hilton cocktail bar one night during their 1965 tour to Australia, she coolly noted their drink of choice; bartender Eddie Tirado’s newly introduced Bourbon and Coke, before returning to sip her classic Martini, ‘hoping to look cosmopolitan and sophisticated’.

Noeline also found time to entertain us on TV’s ground-breaking satirical “The Mavis Bramston Show” one of three pivotal programs in Australian television history along with, My Name’s McGooley, and the Naked Vicar Show.

‘The Naked Vicar was a bit later, that’s in the ‘70s, but certainly the ‘60s to the ‘70s. I was very, very lucky to be in all those shows, and they ran for such a long time. With the Mavis Bramston show we did something like forty weeks a year. That’s a lot of television every week for a few people, learning new material before the days of auto-cue,’ says Noeline. ‘Graham Kennedy the king of TV in the 60s. We didn’t see each other’s shows, of course, because we were working and you didn’t have video tape then. There was no way you could see each other’s show, we just knew of each other. And of course he was in Melbourne and we were in Sydney. So the only time I saw Graham was at various functions. I saw him once when Don Lane had a function at his house in Vaucluse, and Graham was there and I was there, and I was so keen to meet Graham. But I could see that Graham would rather stick pins in his eye than be at this party. He hated large gatherings. So I sensed that, I think I probably just dropped a curtsy and moved on. But we became very close during the making of (TV show) “Blankety Blanks”. It was becoming clear that Australians were enjoying seeing their own stars with their own accents on television, because before that everyone had to pretend to be British or use a mid-atlantic accent. In the 60s we had to go overseas to be recognised as an important person or a real actor. I did the overseas experience and I thought of course I’m going to stay in England and work. But I was so lonely and so sad, and would follow Australians just to hear them talking in the tube or something like that. I thought, no I want to go back home. I wanted to be an actor in my own country.’ 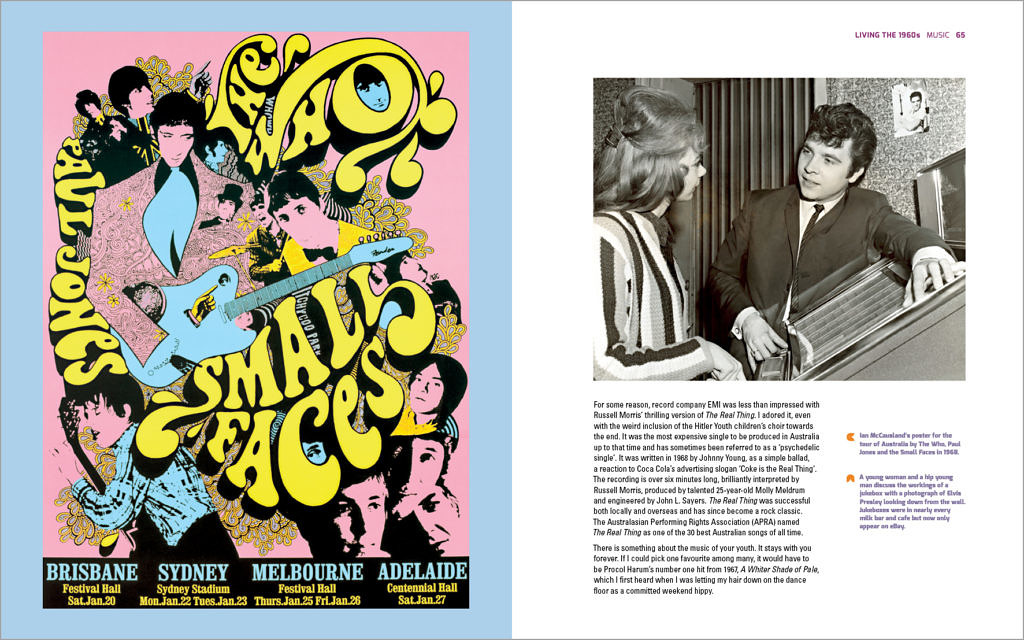 With her trademark dry sense of humour and story-teller’s gift, Noeline is a knowledgeable guide into the smoke-filled bars and cafes, the pastel lounge rooms and boardrooms of 1960s Australia.

She explains the different social tribes: A hippy ‘could live off the smell of an oily rag, and appeared to be wearing it as well’; a beatnik, according to DJ John Burls, was someone who ‘had a little beard, drank wine from a goatskin and called everybody man’. Young people identified as Sharpies, Mods, Rockers and Surfies, depending on the fashions they wore and the music they listened to. But the nation was changing as young Australians woke up and switched on and our cities became more diverse.

‘We were very fashionable at the beginning of the 60s, then by the end of the 60s we threw it all away for the hippy look. People were actually designing clothes for younger people, so you didn’t have to look like your mother when you went out. It was full employment in those early days of the 60s, and young people, even though they didn’t get a lot of money, had money to spend. There were dances for kids and young people, the music changed, everything was a bit more out there. It was exciting I thought, because the 50s were pretty bloody stodgy.

‘Politics began to change in the 60s just like the fashion. Well,

when I was a young person, Menzies was such a fixture, I was quite keen to get rid of him, because he’d been there so long. So I did develop an interest in politics, in the late 50s. Australia was a comfortable place, but it wasn’t really exciting. Very Anglo, but then shortly after that the suburb I lived in became a haven for refugees and immigrants and it changed its nature completely. The smell of the food in the back yards, people were cooking their lamb and with garlic and rosemary, fantastic. We communicated as well as we could, there wasn’t a lot of English with these people in those days. They used to swap veggies with my mum and that sort of thing. I could see that this was better than going somewhere and having grey overcooked English food.

‘Family life also underwent a transformation in the 60s with women working and gaining some sort of independence, which of course Gough Whitlam encouraged when he came along politically. I was very pleased to be part of that push to get Gough installed in parliament, because I was a great fan of his and he was a shy person like Graham, funny to believe that he was shy. But to his credit, on the plus side, he did install many things that gave Australians a sense of belief in themselves. Until the 1969 elections where Gorton just won over Whitlam. That’s the story of “Don’s Party” of course, with the play and the movie, everyone’s having a great party because they think they’re in, but during the night, oh no! My husband and I sat down to watch the American election a year ago  and we had glass of wine and we were waiting there to have a giggle to see Donald Trump kicked out, after a few minutes, “Oh damn, he’s in.”

It went from very lady like and glamorous with lots of makeup and hair pieces and everything to anything goes. That’s the bit I like, because everyone could throw away their underwear if they wished, and men and women could wear the same clothes. I like the long dresses and long hair.  Though once I was told, “Oh no, women can’t come in here wearing pants.” So I took mine off. Not my underpants, I was wearing slacks with a jacket over the top, so I just removed the pants and walked in! 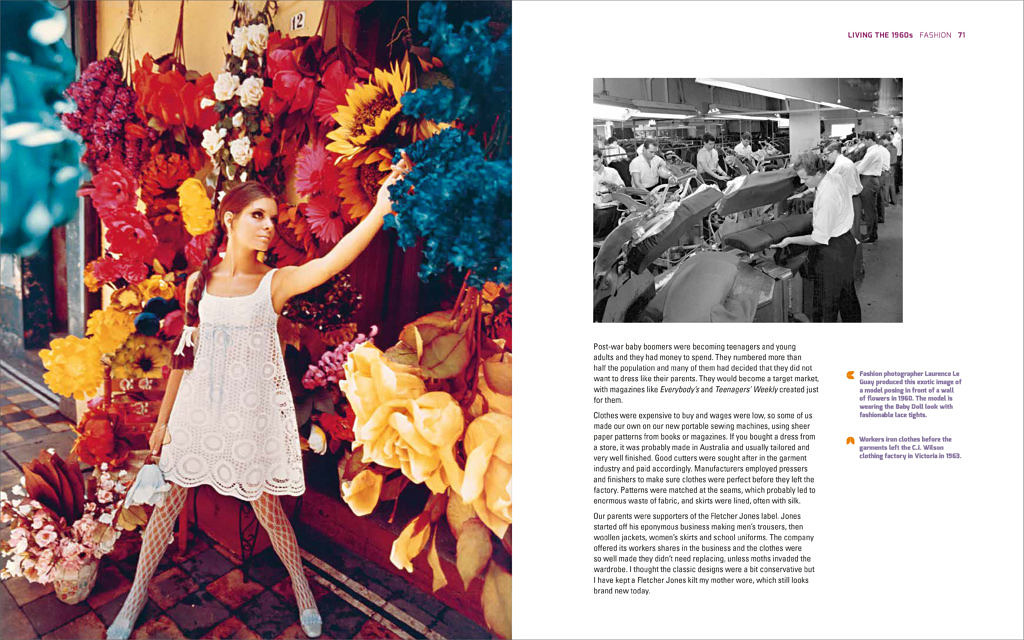 We did have to pull a few barriers down, even with things like going into a Public Bar, where all the men in the room would turn around and look at you. And you were asked to leave and go to a tiny little area for women to sit in, or else your husband would bring you out a beer while you were sitting in the car. It was really bad, women chained themselves to bars and all sorts of things to make a point.’

So, “We’ve come a long way, Babe” and this delightful book is a joyous journey for those who remember, and a barrel of laughs for those who weren’t there. Nostalgia plus, and Noeline is a delightful guide.

(This is an edited extract with permission from an interview with Noeline Brown which appeared in The Last Post Magazine. See  www.thelastpostmagazine.com)