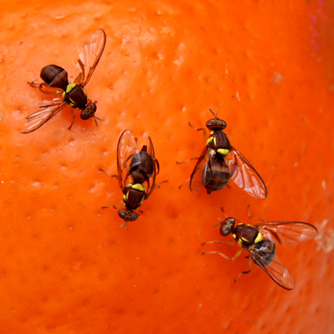 There’s nothing worse than biting into a juicy piece of fruit and looking down to find that it is riddled with wriggling fruit fly maggots. YUCK! Followed closely by the thought of “Did I just eat those!?” Double YUCK!!

These squirmy maggots develop into one of the Manning Valley’s most hated garden pest, the Queensland Fruit Fly. Despite its name, it is not only found in QLD, but also NSW, ACT, VIC and the NT.  It is  recognised as one of the most serious pests in Horticulture, as it can reproduce rapidly, disperse widely, and successfully infest most fruit and fruiting vegetables. The larvae not only destroy fruit but also are a major quarantine issue, both domestically and internationally. Annually, the cost to Australian Agriculture, in loss of produce resulting from the QLD Fruit Fly, adds up to approximately 100 million dollars. Although the cost may not be the same for us home gardeners, it is still quite relative with the detriment and destruction that it brings. Working at the nursery, I think it’s fair to say that the QLD Fruit Fly is responsible for more bad language from gardeners than any other pest.

So, the main question needing to be addressed is, “How do we combat and prevent these pests literally destroying the fruits of our labour?”

Understanding its lifecycle is key to controlling fruit fly, so that it can be attacked at its most vulnerable lifecycle stages. The QLD Fruit Fly has four life stages – egg, larvae, pupae and adult, and is mainly active through the warmer months (September through to April).

The life of the fruit fly begins when a female stings (penetrates) and lays her eggs into a selected fruit. Once the fruit has been stung, the eggs hatch into maggots that feed on fruit tissue. This usually results in rot, and the fruit dropping onto the ground. You’re very unlikely to see these eggs, as they are laid within the fruit and well beneath the skin. Occasionally, the puncture sites from the female will become infected and you may notice them, but otherwise, apart from cutting open the fruit, they are hard to see. 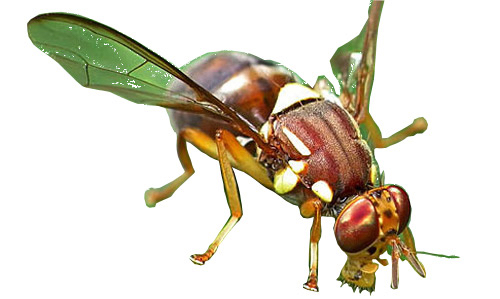 When these maggots have fed on your lovely juicy fruit, they then wriggle out and burrow into the soil where they pupate. They emerge later as adults and mate, producing more eggs to lay into fruit. You’re much more likely to see the adults flying around, more than any other lifecycle stage.

This cycle is repeated multiple times in a season. Eventually, as winter and cooler temperatures approach, the pupae remain in the soil, avoiding the cold, and emerge in spring when it warms up again.

Generally, things to watch for include:

Keep an eye out for QLD Fruit Fly on some of their favourite fruits including: stone fruits, loquats, guavas, tomatoes, feijoas and citrus. Other plants they commonly attack are apples, eggplants, capsicums, avocadoes, quinces, bananas, figs, mangoes, olives, passionfruit, and pears. The Queensland Fruit Fly will also sting the fruits of lilly pillies and other natives. So, be vigilant.

With knowledge of life cycle and potentially susceptible fruit, a range of fruit fly control and prevention methods can be utilized appropriately to increase effectiveness.

Spray controls in the past involved chemicals such as Rogor and Lebaycid.  Although effective, they have since been removed from the home garden market due to their harmful potential in relation to edible fruit. This has made room for other less toxic approaches to control fruit fly. Some of note include Yates Success, David Gray Fruit Fly Spray, and Nature’s Way Fruit Fly Control. These target and kill adult fruit flies and destroy eggs and maggots within fruit. Do bear in mind that fruit cannot be consumed immediately after treatment, and withholding periods will apply.

Trapping is a method that may be used in conjunction with spraying. Traps hung in trees use an attractant to draw adult flies into a container. Once captured, the trapped flies are unable to escape and are either killed by an insecticide, or drowned in a liquid. Two common types that use these methods are Wild May ( a liquid which attracts and drowns), and a common fruit fly wick which attracts  fruit fly to an insecticide, leading to their death. Homemade traps are also effective. One can easily be made  using an empty plastic drink bottle with 5mm holes drilled roughly in the middle. An attractant (e.g. vegemite) can then be added along with and an insecticide (e.g. Malathion) to kill any fruit fly attracted. Traps are great for small infestations.

However, prevention is always better than control. The first and likely the most effective organic solution for the home gardener is exclusion. This simply involves covering either the individual piece of fruit, fruit clusters, or the whole tree. Bags should be placed over the fruit as soon as it is formed. Excluding fruit fly from the entire tree is also possible by using a cover such as fruit fly netting or a lightweight fabric such as a light shade cloth. It is best if covers are supported by a frame. This usually helps deal with bird, bat and possum problems as well. Pruning your fruit trees to a manageable size, or planting dwarf trees, will also make it easier to cover and harvest fruit.
Fruit fly infestations may be avoided altogether by picking your fruit and vegetables early, as fruit fly are generally attracted to ripe fruit. Grow fruit that will ripen after harvesting, e.g. tomatoes- pick early and then ripen inside. Early harvests can also be achieved by planting early fruiting varieties which crop before fruit fly populations build up.

Hygiene is important too. All fallen and unwanted fruit should be collected and binned/destroyed. Destroying this fruit ensures that maggots do not survive to pupate in the ground, to later emerge as adult flies. Fallen and unwanted fruit should not be left in a waste heap or added to compost. Infested fruit can be collected, bagged then disposed of in the garbage bin.  If any pupae do reach the soil, chooks can do a great job if allowed to forage under fruiting trees.

Whether you choose to stick with one or multiple strategies, remember that fruit fly is a pest that can be combated, but does need a community approach.  Fruit flies can travel several kilometres, so encourage neighbours to do the same in order to create a larger protection zone.

It could be the perfect opportunity to meet your neighbours for a cuppa or a BBQ so you can plan a co-ordinated effort.

If you’re unsure which is the best option for you, or if you need to stock up, come along and see us at Wingham Nursery, where we can provide you with the knowledge and equipment (as mentioned above) for the right solution. So you get to enjoy your fruit rather than giving it away to the pesky fruit fly.