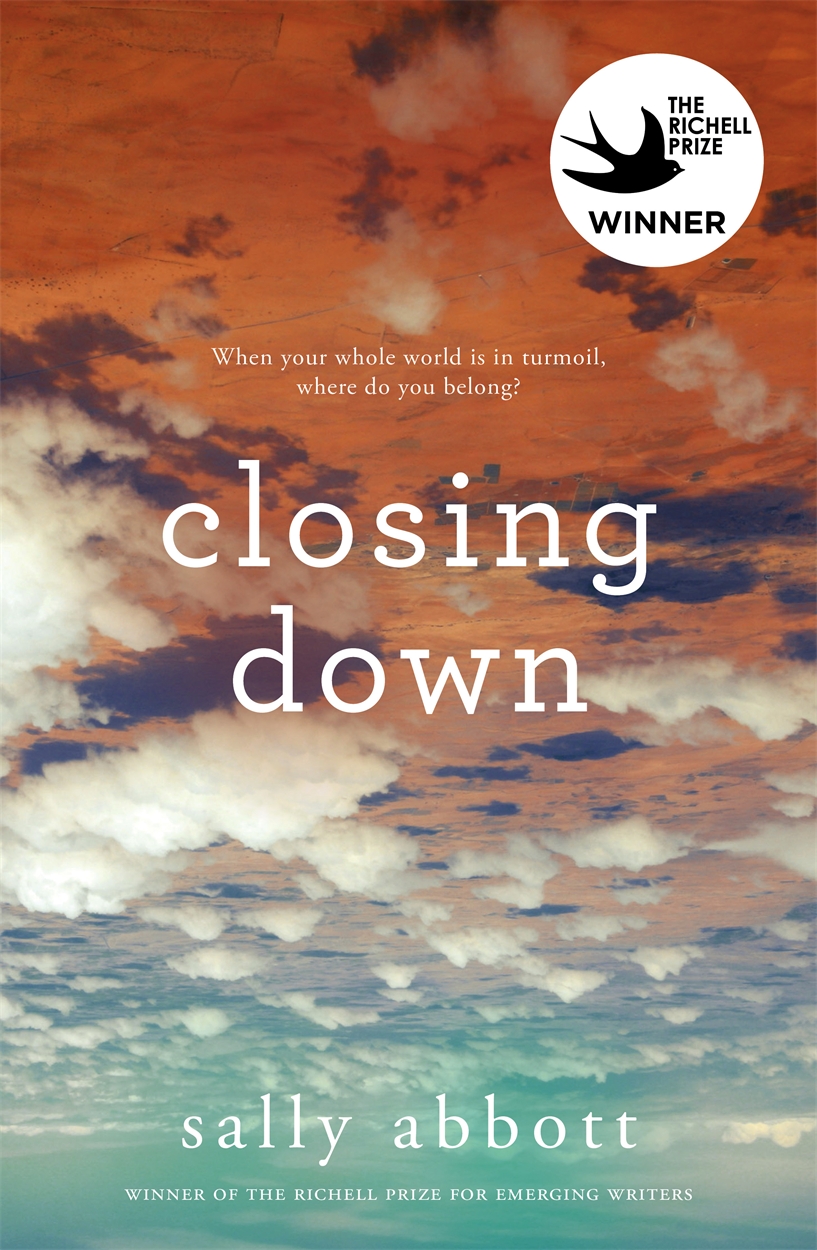 (This novel won the inaugural Matt Richel Prize. Named in honour of Hachette CEO, the late Matt Richell, tragically drowned while surfing in Sydney in 2014.Ed.)

It’s hard to describe exactly what type of book this is.  It is a dystopian novel set in the future (after 2025) in a regional area of Australia. Although, it could be a predictive, prophetic, mystical, factual treatise. The book has all these features and some more. The theme of place and being at home in the landscape is all through the book. Robbie the globetrotting freelance writer who is well known for saying it as it is and getting prosecuted and fined by the secretive government (s) that object to his honesty, remembering his childhood and his home in Australia. Then there is Clare, a middle aged woman who’s home was burnt down and now has to be grateful for a tumbled down rented place in the designated Expansion Zone of Myamba. Granna, Robbie grandmother who raised him as a boy, living in the ‘House of Many Promise’ that has a history, both hers and many other families who appreciated the beautiful established gardens and the carefully preserved house. Granna is the only character in the book who is living ‘in place’. All the other people are either moving or have moved or are now walking north, away from the cities that are too crowded with people who belong to the wide open plains of the inland.

Australia and the world has experienced an economic crisis that has crippled the country.   Huge refugee camps have been established all over the world. Cuba is just one big camp with millions of people existing there. The citizens of the island have been moved somewhere else. Whole countries have been bought up by either the Chineses, Americans or Middle Eastern countires. South Africa now belongs to the Chinese, and Australia’s agricultural lands and forests have also been sold to the Chinese. (maybe the author is clairvoyant). There are no jobs so most of the population exist on a pension called the Under Employment Assistance and Food Essentials Packs that they pick up once a week. The population rarely know what is happening in the world or their cities. They have TV which broadcasts only reality shows that are like the hunger games, but for real. The news they get is printed on the bottom of the screens. “Hellish Heat Closed US States; Canada Outbids China for Brazil; Myamba Mandolin Quartet Plays Tonight In Town Hall and Bring Your Own Chair; Power Crashes in UK; Global Commodity Prices Up Four Per Cent Overnight; Sausage Sizzle And Cake Stall Sunday morning, Myamba Primary School; International Refugee Station Seven Nears Completion; Will Shelter Twelve Million; Have You seen Ditzy, Missing Since Saturday Morning;

Clare is assigned to go out west to assist with the closing down of towns designated too costly to provide services to. She and a bus load of people scour the towns for scrap that can be reused or sold by the local government. She is led by a cat, to a lady the only resident who lives in a fantastically colourful house in Lilac Town which has been closed down for months. She might be real or she might be a phantom, ‘Everything is weird’ is what most of the people in the book comment. Robbie sees a small girl who draws his childhood trauma. Is this real or just his imagination? The Chinese ghost who tell the history of the House of Many Promises. There is mysticism expressed in the novel that makes the story seem otherworldly. However is this the future for Australia? I think so. There has been serious consideration from the WA Government to implement a closing down of small communities that the State says are too difficult to support. Unviable towns and outstations that are nothing special to the Goverment but are the places in the hearts of those that have lived there.

To get a little political and personal -this novel could be a wakeup call to all of us, as the possibility of the regional areas of Australia declining because of the cost of services, lack of professionals willing to live in the bush, and the lack of jobs for young people, will inevitably result in decline. The NSW State Government has chosen Port Macquarie as the growth (Expansion Zone) area, therefore there won’t be much Government money spent in Taree and Forster area. We probably need to get used to less, not more funding for our schools and hospitals. Already the State Government has moved some of their office’s to Port Macquarie. To conclude on that dismal note, I really liked the book. The writing was excellent, the characters well rounded and really endearing. You need to have a hanky ready for the first few pages, but after that it is a quick paced novel. I found it hard to put down and read it in a few days.