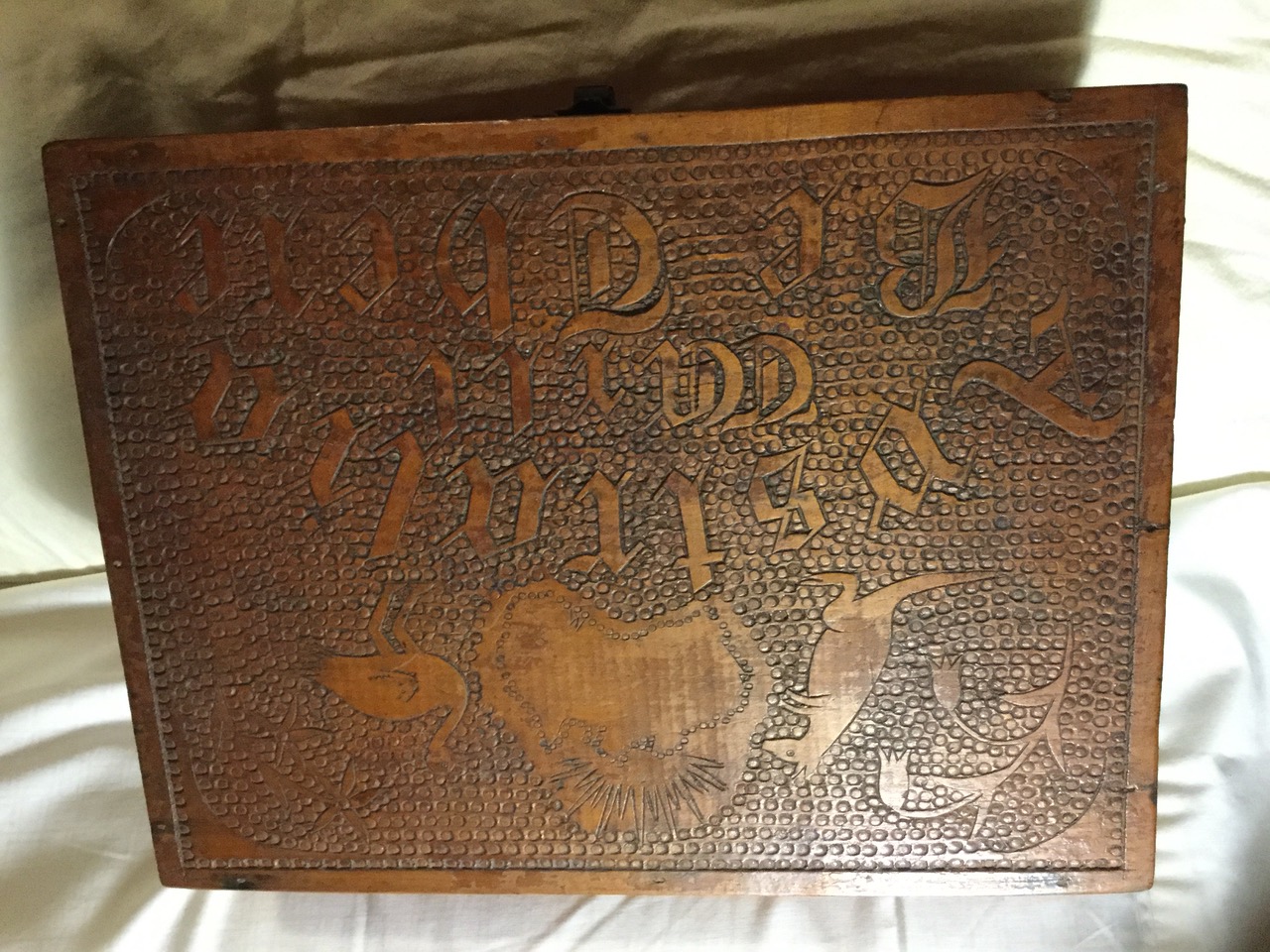 Trench Art carved box – “Australia Will Be There”

Collect the past & invest in your future, with an accumulation of knowledge and great items with history to share.

You can teach a student a lesson for a day, but if you can teach that student to learn by generating their own curiosity to find out more, they will continue with their own learning process for their lifetime. It works with collecting. Your desire to learn more about your items often makes you an expert in that field.

Jen & I spent some time in Scone this month. Our daughter, Kate & her family have bought their first house and needed some help with the move. We had a  great time seeing the character of the new house take shape, had a wonderful time with our two young granddaughters, Lucy & Charlotte (Louie & Charlie), & just being with family is special!

I often say, “Well, the people you meet in this collecting game.” Dan & I were taking a load of ‘unwanteds’ to the Scone recycling centre, & I met and started talking to a gent who was leaving the area. He was cleaning out some old possessions. He was telling me that he had been a hoarder for sixty years, & was moving some things to Inverell & getting rid of others. My ears pricked up! I explained I was a collector & asked if he had anything interesting he would like to show. Two houses & sheds later, I had a ute full of interesting items. Hilton was happy with dollars in his pocket & less items to move.

Two of my favourite buys were a narrow gauge railway trolley, used for carting ore out of mines from the 1850s to 1890s, with original rail line,& an old Breville 1930s hand plunger, metal washing machine. I was pleased that I met Hilton, a really interesting & knowledgeable old character.

We have just commemorated ANZAC Day, where we remember & pay respect to the service men & women who sacrificed their lives & their youth in defense of Australia. We are extremely lucky to live in a part of the world where conflict is not so close at hand.

Trench art is a phrase that describes folk art created by soldiers, who were stuck in the trenches, with long periods with nothing to do but wait, during World War I. But trench art also includes all sorts of art objects made during numerous military conflicts going back to the early 1800s, including items produced by prisoners of war.

There are several generally accepted categories of trench art. Some of the earliest are wooden boxes. By World War I, both sides of that struggle were engraving and carving everything from spent shell casings to soup bones, transforming them into mementos and useful historical records of the war to end all wars. Some pieces are particular to certain battle zones. For example, Turkish prisoners were known for their beaded snakes.

Those soldiers who did not have the time or tools to engrave spent artillery shells in the trenches often brought them home, where they would be embossed, fluted, and flared. Engravings on canteens and mess kits were probably done in the field, as were paintings on helmets.

Other examples of trench art include letter openers and knives made from bullets and shells; presentation plates hammered and engraved from flattened casings; lighters formed out of enemy belt buckles; and inkwells carefully crafted from fuse caps.

Soldiers recovering from their wounds also made trench art, usually in the form of embroidered badges and belts. Similar pieces made by wives and girlfriends, waiting for their loved ones to return home, are also considered trench art. The box in the picture that I purchased many years ago  is a wonderful piece of Australiana.

You just never know what is around the corner. The enjoyment in collecting is the getting out and searching.

I love the history that comes with searching out and researching these interesting objects.
I recommend collecting to everyone. Find the category or categories that suits you, or take the plunge and collect a wide variety of unique and interesting treasures, or limit yourself to just one area. It is always fun and something that can be done for the rest of your life.

If you have items you are not sure of, I may be able to help with information, appraisals or sales. I love looking at, and sharing the stories of, old & interesting items. Call Rex – 0427 880 546.