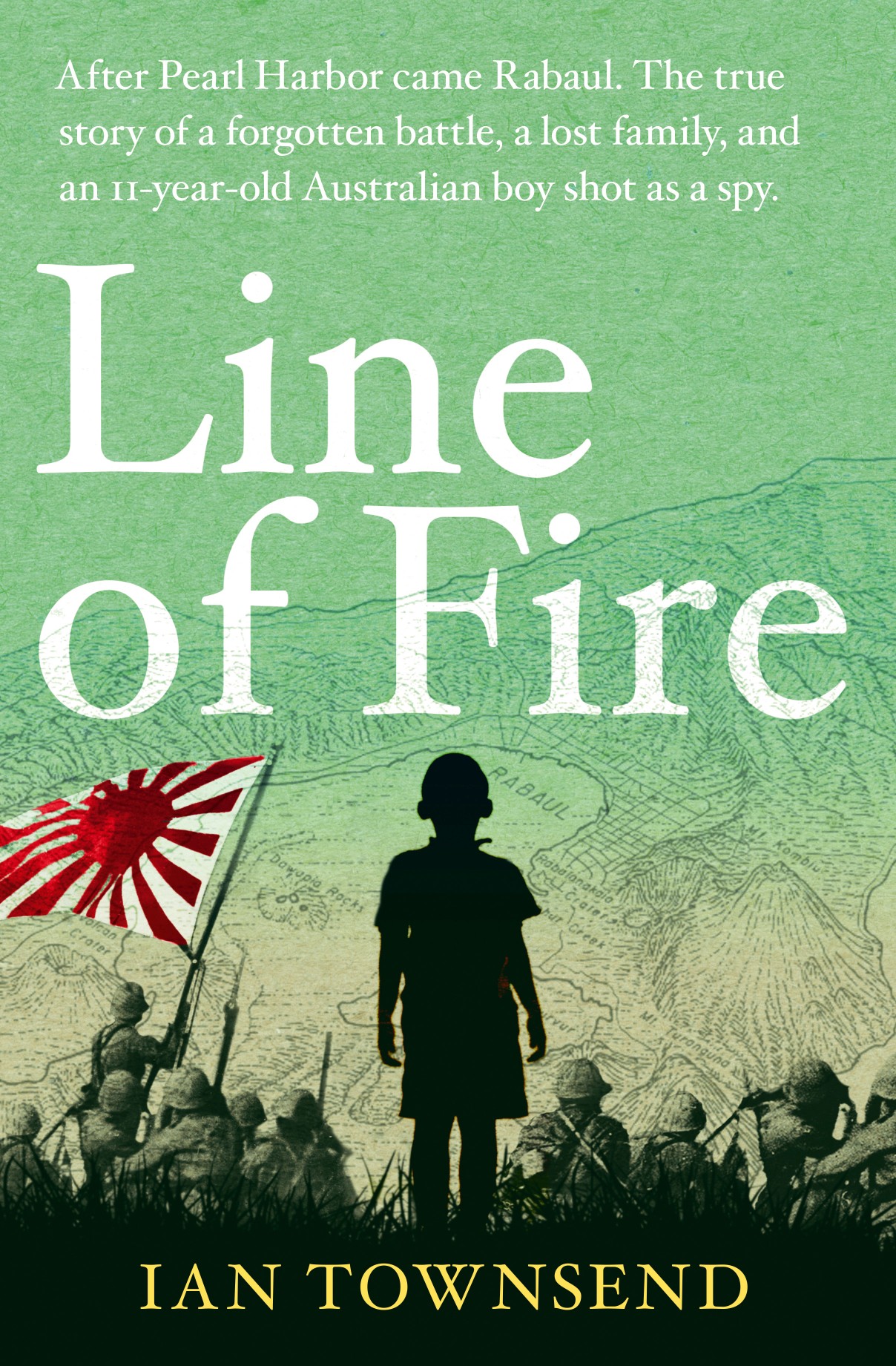 “Important” would be one word to describe this book.  Also poignant, powerful, absorbing  – a history of one ordinary extended family and what happenened during the 30s until on May l8, l942 an ll year old boy, blindfolded and holding his mothers hand, is shot by a Japanese soldier at the base of Tavuvur volcano in Rabaul, ( the former Australian Capital of then Australian New Guinea). He and his mother and step-father had been found guilty of espionage.

But, first, back to earlier times.   The author, Ian Townsend, has a photo on his wall of a pleasant enough looking woman, aged 20, Marjorie Manson, taken by a street photographer in 1932.   She is a dressmaker, on her way to court where she was named as “the other woman” in a divorce case.  Marjorie has a one year old son born out of wedlock as they used to say…and the book tells of her battles with her mother, and with Jack Gasmier, the father of her son Dickie.  Jack is a railway carriage builder, a wrestler, a charmer – and married.

Jack goes to Kalgoorlie to try to find gold,  Marjorie decides to brave it out, skimping, lonely, brave and desperate.  Eventually  they did marry….Jack had failed to find much gold but he had big ideas.  He ended up going to jail for false pretences, in effect stealing other peoples money.   Marjorie went back home to her mother to make it  as a dressmaker.  Later she and Jack tried to make a go of it again in Brisbane.

Woven throughout are many fascinating side stories of events and extended family members,  the fears, the difficult relationships, the  mores of the day, and the effects of the Great Depression on ordinary people.  The vivid pictures painted  include many household details some us will remember. I found the Vacola bottles of preserved fruit on kitchen shelves brought memories of my aunt even in the late 50s.

By l937 Marjorie was living in Brisbane, at the same time that in Rabaul, the volcano erupted spectacularly. Four hundred people died.

She was unhappy with Jack in Brisbane, and met a man called Ted Harvey  described  eccentric, with a wife called Wyn, an alchoholic. Marjorie ended up sailing to Rabaul with Ted Harvey, using his wife’s ticket.   It sounds a bit like “The Bold and the Beautiful” but it’s true: Ian Townsend has done his homework.

In Rabaul she found the dark men exotic and fascinating and Ted told her not to stare.

The war was raging in Europe, and within a few years a huge Japanese fleet was heading for Rabaul, one of the most strategic harbour towns in the Pacific.  They wanted it as their Pacific base after bombing Pearl Harbor.  A fleet of fighter ships, submarines, planes and thousands of troops moving quickly across the sea ready to take on parts of Asia, and Australia.  Ian Townsends writing about of this is cinematic;   one can feel the ocean,  see the towns, see the Japanese landing…as the reader can share the peoples feelings and their lives, tragedies, battered by fate and money, love, and intrigue .  In fact the book is remembered week after reading it, remembered as a movie, so rich in images, and in its handling of the emotional lives and troubles of people living in a tropical paradise, surrounded by active volcanos.  And the Great War was coming their way.

Ian Townsend is an award winning journalist, and has written two other books. One is “Affection” a novel about the bubonic plague in Queensland which started in 1900.  I loved “Affection”.

The research for this book, non-fiction “Line of Fire”, is prodigious and it’s a big book in every way. Townsend acknowledges in some places he has had to fill in gaps a little as it is all now about 75 years ago and very few people of the time are alive.  Still he did track down those who are, and has thousands of  written records and documents.

If I have a quibble it is that occasionally there is a little too much detail, side issues about extended family or friends.  I would get a bit confused, and skip a page or two.    But I understand it, and don’t be put off.  This is a real life thriller, a piece of history never told before.  It’s not a film (yet), and Ian Townsend is a fine journalist who knows his stuff.  There was another large volcanic eruption in l941, and another in 2000.

When Ted and Marjorie arrived in Rabaul, where it was quiet, with a few marvellous old buildings and a botanical garden.     The Australian colonialists were comfortable in charge of “the natives”.  But there were seething problems of class and status too, and one led to a deadly betrayal.

Marjorie and Teds lives were not uncomfortable. Ted had a Copra plantation, though it was hard to get his Copra to Europe so he sold it to the Japanese, Dickie did school by correspondence, and ran riot in the Copra plantation.

But the Japanese did evade, thousands were killed, and in a series of events too much to describe here, Ted, Marjorie, Dickie and a few others had to make a secret jungle camp. There was a revolver and a radio involved,  and Ted was possibly literally out of his wits by this time.  For his 11th birthday Marjorie cooked Dickie a cake out of what she had.  After  some bumbling and a betrayal,  Japanese soldiers walked into their jungle camp.

Ian Townsend has found a handwritten statement by the man who betrayed them, dated later, l945.

“A Baining boy spoted (sic) them and led us there I was behind but I could see a soldier slap Mrs. Harvey on the face the boy was about 12 years old started to hit the soldier when his mother was struck the poor boy was hit and kicked by another soldier.”

The Japanese did hold a court trial, but entirely in Japanese, and Marjorie, Ted and Dickie were sentenced to be shot for being spyes. On May 18, 1942 they were blindfolded and led to the edge of a pit dug in the volcanic ash of the Tavurvur  volcano.  War and volcanic eruptions have left no trace of them.

The Japanese Captain who gave the order to shoot was Mizusaki Shojiro.   He was eventually to become an insurance salesman in Tokyo.