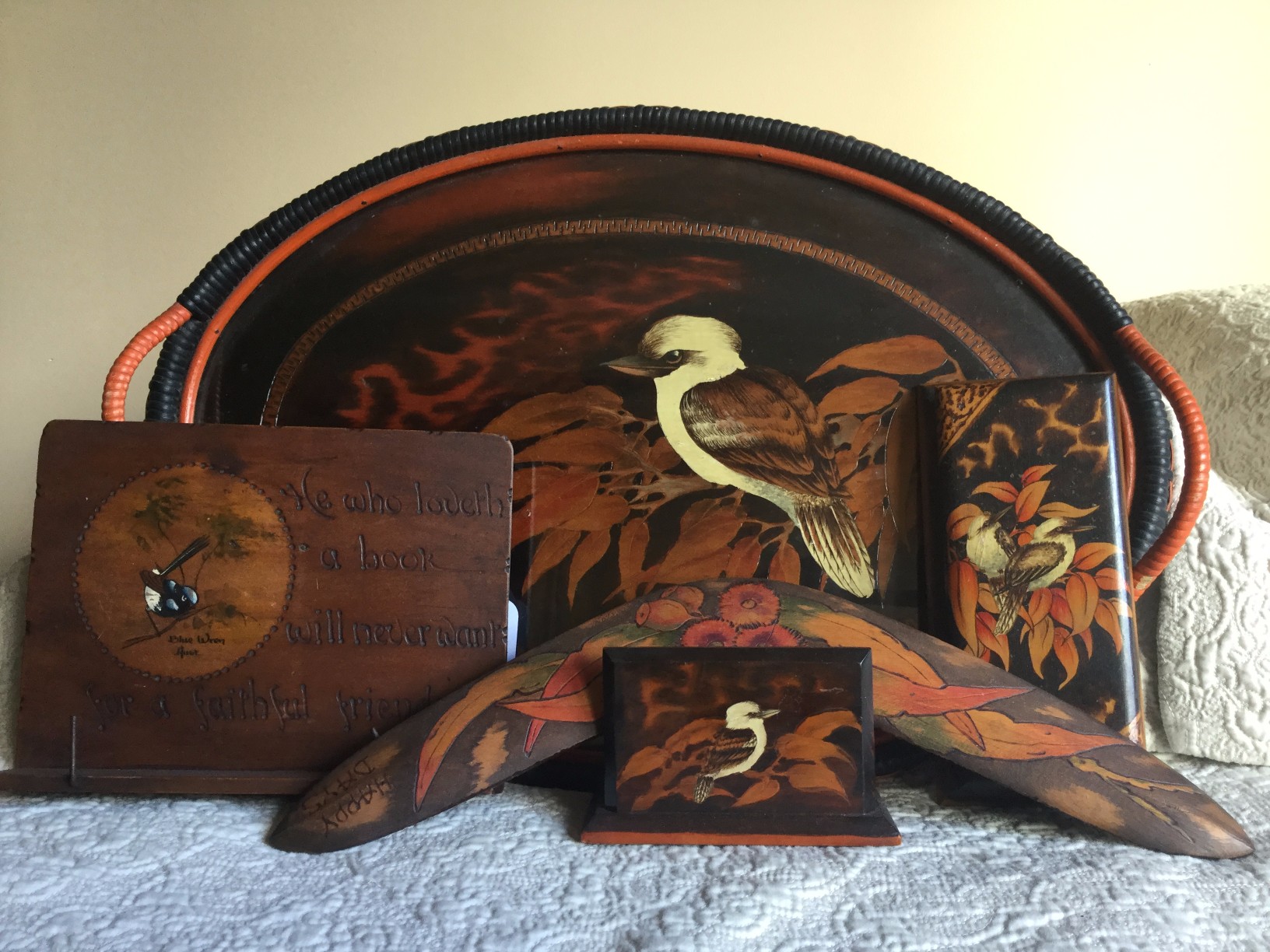 Collect the past and invest in your future, with an accumulation of knowledge and great items with history to share.

You can teach a student a lesson for a day; but if you can teach them to learn by generating curiosity to find out more, they will continue the learning process for their lifetime. It works with collecting. Your desire to learn more about your items often makes you an expert in that field.

The people you meet, the stories you hear! Jen and I were having coffee the other day and a gent, who recognized me from auctions and markets, introduced himself, and his wife and started telling of his interest and collection of material from the Kelly gang and family. He was very knowledgeable and had great stories to tell. One of his pride and joys was a brick from the old household of Ned’s brother. I loved the living history being passed along.

Pokerwork or Pyrography is the art of decorating wood or other materials with burn marks, resulting from the application of a heated object, such as a poker or needle. Pyrography is a Greek term meaning – ‘writing with fire’. It can be practiced using specialized modern pyrography tools, or using a metal implement heated in a fire, or even sunlight concentrated with a magnifying lens. Pyrography dates from the 17th century, and reached its highest standard in the 19th century.

A large range of tones and shades can be achieved. Varying the type of tip used, the temperature, or the way the iron is applied to the material, all create different effects. After the design is burned in, wooden objects are often coloured. Light-coloured timbers such as pine, beech, birch  and, in Australia, Huon pine was a favourite, as their fine grain is easily worked. However, other woods, such as maple, kauri pine or oak, are also used

Pyrography is also popular among leather artists and gourd crafters, where designs are burned onto the exterior of a dried hard-shell gourd.

The process has been practiced by a number of cultures, including the Egyptians and some African tribes, since the dawn of recorded history. The art form dates back to prehistory, when early humans created designs using the charred remains of their fires. During the Victorian era, the invention of pyrography machines sparked a widespread interest in the craft.

In the late 19th century, a Melbourne architect by the name of Alfred Smart discovered that water-based paint could be applied hot to wood by pumping benzoline fumes through a heated hollow platinum pencil. This improved the pokerwork process, by allowing the addition of tinting and shading that were previously impossible. In the early 20th century, the development of the electric pyrographic hot-wire wood-etching machine further automated the pokerwork process.

In the late 1800’s, and up until the 1940’s, Pokerwork was a very popular medium for budding Australian artists with native animals,  Kookaburras, koalas, kangaroos and blue wrens were favourites, and also a wide variety of Australian flora was popular. Featured on trays, vases, smoking stands, plates, dishes and a wide variety of surfaces, they became precious household pieces for display and use. They can be still found in antique shops, markets, auctions, garage sales. The enjoyment in collecting is the getting out and searching.

I love the history that comes with searching out and researching these interesting objects.

I recommend collecting to everyone. Find the category or categories that suits you or take the plunge and collect a wide variety of unique and interesting treasures, or limit yourself to just one area. It is always fun and something that can be done for the rest of your life.

If you have items you are not sure of, I may be able to help with information, appraisals or sales. I love looking at, and sharing the stories of, old and interesting items.