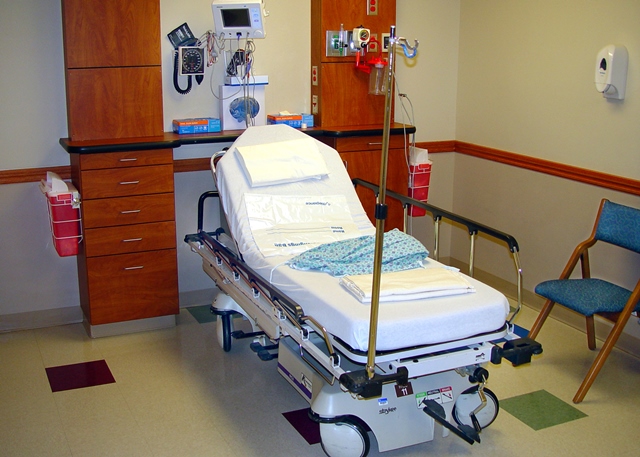 Don’t have a heart attack or serious health event in the Manning… the prognosis is Not Good!

In a shocking survey, looking back over the past few years, statistics show that the outcomes for patients in the Manning suffering  serious medical issues,  such as  heart attacks, are the second worse in NSW. While there have been no recent updates of these statistics, medical specialists from Manning Base Hospital believe that a new survey, due out soon, will show no, or little, improvement.

There has been an ongoing battle to have Manning Base Hospital upgraded to be a Regional Trauma Centre, but a recent report by Professor Zsolt Balogh, from Hunter New England Health District, (HNEHD), found that the Manning Base failed to meet 50 of the essential 81 imperative criteria.

Patients in the Manning district, needing acute trauma assessment and treatment, are either taken directly to John Hunter or Port Macquarie. If patients taken by ambulance to Manning Base Hospital are found to need acute care (where perhaps ambulance officers did not realise how severe their injuries or condition might be, for example) they are sent to John Hunter or Port Macquarie, often after long delays, due to lack of facilities and hospital procedures. This can compromise the outcomes for patients, as well as being inconvenient and costly. It is frustrating for Manning Base doctors and patients, when minor trauma cases are shipped out to Port Macquarie or John Hunter hospitals unnecessarily.

Despite applying for extra funding for years, Manning Base has always been told that money was not available, due to lack of resources. However, specialists at Manning Base have been frustrated to see the extent of investment into John Hunter Hospital, especially in areas such as cardiology. They see plans for highly specialised, new and expensive interventional procedures, and investments in John Hunter, to be at the expense of the professional progression and development of Manning Base Hospital.

So why has the Manning Base Hospital been overlooked and, seemingly, gone backwards from its status of ten years or so ago?

Former Greater Taree City Councilor, Dr David Keegan, who has practiced in the Manning for close to 31 years, recalls,

‘The Manning Base Hospital (MBH) was larger than Port Macquarie Base Hospital (PMBH),up until ten or fifteen years ago. Both hospitals served approximately a 90-plus thousand population.  The reason for the decline of Manning Base Hospital, especially compared to PMBH, has been attributed to the Port Macquarie community providing active community agitation for change, along with effective political representation by their then MP. Whilst MBH has declined, District Hospitals such as Kempsey and Macksville were rebuilt, after the representations made by their local MP.’

The issue of Manning Base obtaining regional Acute Trauma Centre status, has been a festering sore amongst Manning medicos for several years. Now, as the shocking figures are made public, even though dating back several years, medical specialists, the Manning Hospital Medical Staff Council, medical public advocacy groups, such as the recently formed Manning Great Lakes Community Health Action Group, are raising an outcry and prodding our pollies.

Former GTCC Deputy Mayor, Alan Tickle, who now heads the local Health Action Group, points out that areas of concern relate to the inequitable attention given to Maitland Hospital by Hunter New England Health District (HNEHD) where, despite Maitland Hospital being on Trauma ByPass by the NSW Ambulance Service, and Maitland’s proximity to John Hunter Hospital, unlike Manning Base Hospital, Maitland has been equipped to a level that can sustain training and services equal to that of an acute care hospital.

‘The action group advocates on behalf of the community.  We are tired of being second best, and watching the resources of the likes of Port Macquarie and Maitland Hospital grow, while we suffer,’ said Alan Tickle. ‘In no way is our action to be construed as criticising hospital staff or the Executive, who do a brilliant job, but it is in fact supporting them so that they are equipped to offer services that ought to be available to this community as evidenced in HNEHD’s own report.’

And, at the heart of the matter, specialists, medicos, staff and members of the community believe that Manning Base Hospital is being marginalized, while funding and special services are going to John Hunter Hospital. This is despite the $20million upgrade to Manning Base Hospital, where the funds are targeted for building improvements, such as parking facilities and, later, cancer care and renal facilities.

After reading the Balogh report, State Member, Stephen Bromhead, admitted he was – “Shocked. I really feel I’ve been misled by Hunter New England Health, as has the community.” He has now pledged to fight for the services and staff needed to put into an upgraded MBH.

Dr Keegan comments, ‘Those who should be shocked by our local MP’S response, are the medical staff who have repeatedly pointed out to our local MP, the deficiencies at Manning Base. Professor Balogh’s report purely summarised what was already known. The present staff has been doing an amazing job with the limited resources available. However, the crunch time for action is now.’

Specialists at Manning Base Hospital believe that there should be support and resources for a vital service such as a public-private health partnership, for cardiac catherisation (such as coronary angiograms & stent procedures) now being carried out at Taree’s Mayo Hospital. The Manning Base Hospital is not suitable for such procedures, as it lacks a cardiac catheterisation laboratory.

Cardiology and ICU are closely connected and, at present, there has been no upgrade to ICU at Manning Base for twenty years. There are only two ICU-funded beds for a population of 110,000. Considering the Manning and environs is a retirement area, with an ageing population, this would seem to be a priority for a hospital upgrade.

Additional concerns for the Manning Base Hospital staff appear to be a lack of communication, co-operation and understanding from some areas of HNEDH.

The follow up second press release regarding Prof. Balogh’s report issued by the Strategic Relations and Communication department of HNEHD has been rejected by senior Manning Base Hospital staff. One reason is that it doesn’t address the broader issues of Manning Base Hospital concerns. This applies especially to  heart attacks. Packing patients off to John Hunter hospital does not necessarily deliver the best outcomes, given the delays in transfer, time frames, the inconvenience and costs to the patient and families, compared to being treated locally immediately in a state-of-the-art facility.

The Australian Competition and Consumer Commission, our corporate watchdog, is investigating this plan. The ACCC is involved, as the acquisition and merger of the Mayo with Forster triggers Section 50 of the Competition and Consumer Act of 2010, as the two hospitals are within 40 kms and/or 40 minutes’ drive apart. Submissions were called for, but the medical reaction locally has been swift, calling the plan a very bad idea.

Healthe Care is also planning to open a day surgery unit in Port Macquarie. This means that they would ostensibly control services in Port Macquarie, Taree, Forster/Tuncurry and Gloucester, which presents a monopoly charging what  it wishes to charge. This would not be a healthy outcome for our area.

State Member Stephen Bromhead’s stand, however, is that; ‘It is a commercial decision between two private companies. If approved by the ACCC, then it should have the community’s support.’

Dr Keegan sheets the blame back to the NSW government, under former Premier Baird. ‘The forced

amalgamation of our three local councils is a travesty, resulting in an unelected body overseeing the centralisation of power at Forster/Great Lakes. The main concern I have is the loss of oversight by Elected Councilors, and by an Independent Audit and Finance Committee, as well as the usual checks and balances that elected Councilors and Mayor provide.’

There is a strong feeling in the Manning community that we have been cut adrift, and are on our own in a sea of vested interests and power grabbers, who are not part of our community, yet have control over our destiny.

It is time to stand up and speak out and support local action groups, and make your views known. Better yet, as former President Obama said, “Get a pen, get a clipboard, get out there and do it yourself. Fired Up. Ready To Go!”

Let’s get out there and make our views known on what WE want for the Manning.

We need good, honest caring people who will work for our community, not for their self interest. What we need is a transfusion of new blood into our local politics! Election time is looming.

(Dr David Gillespie’s office was contacted for a statement. They did not respond. )