Book Review – A Single Tree, Voices from the Bush 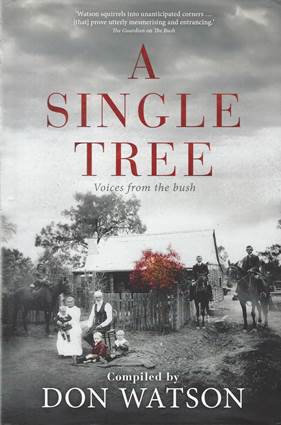 A SINGLE TREE, VOICES FROM THE BUSH

Don Watson is one of Australia’s great writers, and his recent book, “The Bush”, is already a classic.   This one, “The Tree”, is a fascinating follow-up, and the two together now form an important contribution to the Australian ethos – both the good and bad.

Don Watson has only written the introduction. All the other 400 pieces are extracts, fragments,  jottings, diary notes, excerpts, essays, poems, and letters. They are written by farmers, scientists, bush poets, historians, explorers, settlers and aboriginal people, and they create a kaleidoscope of images, dreams and understanding .

Many of the writers are very well known people – Robyn Davidson, Mary Durack, Tom Keneally,  Patrick White, and early writers like Joseph Banks in 1770, and  Mrs. Aeneas Gunn in the Never Never.   Coming to terms with the Australian plants, weather, hardships and beauty is always there.

Brutality is never far away – towards each other,  to the aboriginal people, to the environment and to their animals.

There is also fascination and awe at the bushland itself, the silence, the “melancholy of the Narrow Leaved Red  Ironbark”,  and homesickness.

Ion Idriess wrote in 1932  a description of a filly, struggling hopelessly after a crocodile has her by the nose. Elsewhere, a story of wood cutters in l850, and their harsh grim lives.    Then there’s the man who had  20 sets of ears of aboriginal people pinned to his wall. There are also stories of generosity, loneliness, religion, and the horrors of drought for animals.

You must read it.

Here are some snippets: Joseph Banks in l770: “We saw many Indian houses and places where they had slept upon the grass without the least shelter; in these we left beads, ribbons etc.  …..we saw also the dung of a large animal, that had fed on grass, which much resembled that of a Stag.”

There’s the diary of outback woman Emily Caroline Creaghe, an explorer  and diarist, in 1883: she lived in a bush humpy, and wrote of small daily events and  the terrible heat.  Then one Wednesday casually drops in a shocking thing – “Rained all afternoon…the new gin, whom they call Bella, is chained up to a tree a few yards from the house, she is not to be loosed until they think she is tamed.”

Jump forward to 2013 into a marvellous piece  by Bill Garner, about spending a sleep-out holiday by a creek, with observations of the bush again, the magpies, the smooth white ghost gums.   He writes “camping is the antithesis of travel. ..It is about being stopped, being still…time lengthens. On the third day we enter that meditative condition for which serious campers wait, knowing it will come….in a slightly  dazed condition. Camping is intoxicating.”

There’s the never ending  search for water, the state of  animals after a bushfire, the joy of reunion after months of isolation, a remarkable description of droving  thousands of head of cattle, and having  to kill 1300 calves because they slow the drive down. The distress and bellowing of the mother cows.

There’s also modern material: how irrigation raised the water table and brought with it terrible salt, the denigration and wrangling over abuse of the Murray Darling system up till recent times.

One poem brought tears – “Shooting the Dogs”,  by Philip Hodkins written in l988. Another was the story of horses having to travel 101 days without water, and their legs buckling , ‘till they eventually sank to the ground.

Shirley Walker wrote in 2001 of the beauty of her childhood 60 years ago, in the rainforest areas around Mount Warning, in a valley north of Murwillumbah. The great event when a plane crashed on the Lamington Plateau, survivors lost in the jungle for a week, one crawls through lawyer vines to look for help. She also writes about Burdekin men;  they “wear blue singlets bleached to grey, tight khaki shorts…and mostly no boots….they carry cane knives sharp enough to slice through a leg above the knee…they are accompanied by dogs known as Meathead or Hereboy…They distrust the South”.

Burdekin wives cook over hot fuel stoves and wash in the copper outside, and starch and iron the mens’ shorts.  They sit in the car outside the pub with grizzling children for hours…a Burdekin woman “does not interrupt the men in the pub or the club, scream, fall frothing to the floor or beg her husband to come home soon or she will kill herself.”  There is shame in spoiling the pleasure of men.  Burdekin women know their place. “Of sex they say nothing, of childbirth plenty.”

Post Script: My quibble about this grand book is that the 400 pieces are arranged alphabetically by the authors name,  not chronologically by the date they were written.  This made it feel a little disjointed, a bit hard to read.   But, bless Don Watson, he has his reasons.