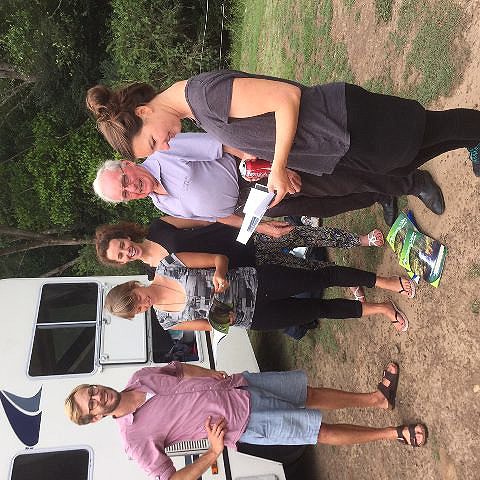 Ron Sky has travelled Australia and, over the years, has perfected camping and caravaning.

So he is the perfect host to welcome overnight campers to Wingham’s Riverside Reserve free camp site.

As a keen member of the Wingham Advancement Group, Ron instigated the idea of setting up the free camping ground by the Brush and the river reserve, as there are public amenities and a sheltered table with a (free) barbecue.

‘It was set up for just overnight, and Council wanted to put up a sign with lots of regulations, but I said keep it simple, and we WAGS will look after it all. Once it was up and rolling I thought it might be nice to have a representative come and greet visitors.’

So, Ron, who lives close by, visits the campsite each evening as campers roll in at dusk to settle for the night.

He welcomes them, answers all manner of questions and hands out Manning Valley tourism brochures and a leaflet from WAG with basic information, emergency numbers, including his own, and a suggestion they leave any receipts or dockets from money spent in town in the little box provided. Visitors often leave notes as well, saying how much they enjoyed their stay.

‘That way we can show that free campers are spending money in town,’ explained Ron. ‘And if they want to stay an extra night, we say okay, why not pop into the museum, visit the shops and cafes, see the sights, like Ellenborough Falls. You’d be amazed at the people who’ve never heard of it. And I answer all manner of questions.

‘We get the grey nomads, backpackers from Australia and around the world, and a surprising amount of people who do housesitting, I’ve noticed. When we first started everybody said, Oh, the backpackers will ruin your camp, But they’ve been absolutely beautiful. Mostly they’re German, they love Australia. The Germans know about the bats in the Brush and as soon as they arrive they ask, “Vere are dis bats!”

‘And there’s a lot of French out here at the moment. Had a few English people and we had a group from the Ukraine here the other night.’

Discretely he points to a caravan.

‘That couple came in late last night, he comes from Melbourne, she comes from Canada. They arrived late when we were having our WAG barbecue, so I said, have you had dinner? Come on over and we’ll find something for you.  They had a great time.’

Ron admits there was a bit of negativity to the free campsite from some locals who thought people in a free campsite wouldn’t have any money to spend.

‘We had a bloke in here the other night with a big outfit, a van that’d cost probably 300 thousand. He’s here because he can’t fit in a caravan park…unless he pays for two slots as they cram them in cheek by jowl.’

The value to the town is enormous, despite a thrust by the traditional caravan park operators to prevent and close free campsites within twenty kilometres of  commercial camping facilities.

A study found that freedom campers are travelers and life-stylers, and not holiday makers.

Freedom campers often travel with a pet, and many caravan parks refuse animals. They also do not require or desire all the “extras” such as camp-kitchens, children’s adventure playgrounds, tv/billiard/video rooms, swimming pools, tennis courts etc. And at commercial parks campers are charged for these facilities.

Most freedom campers have self contained vehicles which include toilet and washing facilities so only require a place to park at night.  They much prefer the silence of a starry sky, wildlife settling to sleep in trees and bushes, and the tranquility of nature.

The study also found that freedom campers spend an average of around $700 per week while travelling through small towns, which did not include parking costs.

Says Ron, ‘The last couple of weeks we had a 1,200 dollar caravan repair done in Taree, and another fellow with a motor home put six new tyres on which cost nearly two thousand dollars. People are finding us through the wikicamps website  now.’

Ron insists he’s not retired, but just does this for the love of it. He ran a service station in Wingham then worked at Sheather’s machinery in Taree, so if any visitor is having mechanical problems he can help out.

And he certainly knows his way around a campsite.

‘Leona and I  were a good team when we travelled and camped. We went with our friend who was a doctor and I was the mechanic, so we had it covered. We did the Canning stock route twice, we’ve been across the Simpson Desert four times, up the west coast and down the middle and up the Gulf several times plus all the way up to the tip.’  He recommends trying a recreational vehicle before going to the expense of buying one.

He waves his arm, ‘This is why people enjoy free camping in places like this. It’s very quiet and special.’

As the twilight glazes the Manning River and a mullet jumps, a large motor home rolls in and Ron has soon introduced himself to three Swiss young people, and a Canadian girl they met in Sydney. They’re heading to Cairns. He hands out his material, exchanges stories and advice.

One of the girls has a last question.

‘Sure,’ says Ron.  And as she delightedly heads to change he calls out, ‘Oh, watch the bull sharks!’