The Future of Our River – Under Threat? 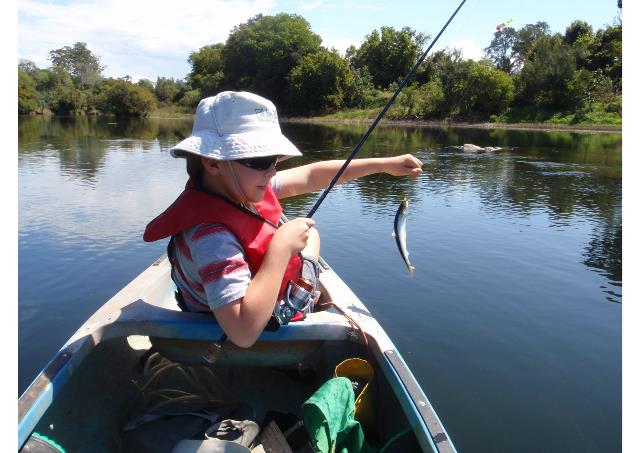 The joy of fishing – Max gets a herring.

Dr John Harris sounds alarm bells about threats to the health of our river system.

‘There are a number of threats facing the Manning River, although its condition hasn’t changed a lot over recent time. Yes, climate change has a role to play but more direct threats involve water extraction and poor land use. There are regulatory limits on water extraction by irrigators and others and NSW DPI’s Office of Water is responsible for ensuring compliance with the rules. Mid-Coast Water also keeps an eye on total extractions from the river as well as other changes in the catchment. To an observer, irrigation use often seems inefficient and showing little regard for the real value of the water, suggesting irrigators may be getting a very good deal for the water they use. For instance, there’s a lot of evaporative waste when they spray-irrigate in the heat of the day, especially when a hot dry wind is blowing, so only a small amount of the water actually reaches the pastures. A much better system would be to spray at night but that’s harder to manage, and there doesn’t seem to be enough incentive.

‘But things have improved with irrigation practices in recent years, with water sharing plans now operating in the Murray-Darling Basin and in coastal rivers like the Manning. And there is a greater ecological focus by irrigators and government on water use in relation to the condition of rivers.

‘Problems for the river can appear in many different ways. There are suggestions of pollution hazards and reduced river flow from issues like fracking or the proposed Rocky Hill mine at Gloucester, though the full implications are not all clear to me. In the South Channel area of the delta, the oyster farmers have complained about the poor water quality in the system when sediment chokes up the ocean entrance, reducing tidal flushing and damaging oyster production. That then results in pressures on Council to put in a dredge to keep the channel open.

‘There’s historic and other evidence that increased erosion from land use causes sedimentation in the river. Land-use problems, from inappropriate forestry management or poor agricultural practices like overgrazing, allowing cattle to damage the stream banks, clearing of steep slopes, or removing riparian vegetation have all contributed to sedimentation in the river since European people came here.

‘There is a balance between the sediment that accumulates in the river and how much water is in the river to flush it out to sea. If you change either the amount of sediment or the flow of water, the balance is disturbed. If you take water out of the system something has to change, especially its capacity to carry sediments and nutrients out to sea.

‘Part of the answer lies in reducing the loss of soil through the principle of slowing down water run off from the land into the stream drainage channels as devised in Yeoman’s Keyline system invented in the 1950s by Australian engineer and farmer, P.A. Yeomans. Keyline planning is based on the natural topography of the land. It uses the form and shape of the land to determine the layout and position of contour banks and channels, farm dams, irrigation areas, roads, fences, farm buildings and tree lines.

‘The development of the Permaculture concept owes much to the Keyline system. It later inspired Peter Andrews to develop a related system of retaining the water on his land through soil management. But I don’t agree with his ideas of encouraging weed growth as a means of anchoring the soil or dumping materials in stream channels to impede water flow.

‘In caring for the river there are many government agencies – in commonwealth, state and local government – plus all the committees that go with them, each of which has responsibilities for particular aspects of river and water management. Then there are all the diverse community groups that are interested in conservation, water quality, aquaculture, boating, recreational and commercial fishing, agriculture and so on.

‘I would like to see a single, integrated community body to provide a voice for the river and to support its welfare. That would be a powerful thing if it could pull all those groups together and I think there’s a very big potential role there in the way we manage and look after the river. And if we set up a good model for it, the idea could spread to other catchments. A politically effective organisation like that could make sure the responsible authorities dealt properly with the issues that affect our river.

‘In addition to the various environmental matters, public access to the river is a key concern. Many access points have disappeared when public roads are sold to landowners, when crown lands fronting rivers are sold off, or when landowners restrict access to the river in other ways. The community is steadily losing its access to one of the region’s main recreational assets.

‘I’m interested in the Commonwealth’s recent White Paper on development of water resources, as one of the issues relates to the Manning. There’s a weir in the headwaters of the Barnard River that sends water across to the Hunter for electricity generation. It’s a modest structure at the moment, but apparently there is a plan to build a large dam at the site and to take water from east of The Divide and send it inland.

‘The idea that’s apparently been proposed for the dam on the Barnard would be to transfer water from the Manning catchment across to Chaffey Dam near Tamworth for use in irrigation. But the water resources of the Manning River are already heavily exploited and further reducing the flow would be environmentally damaging. In the past, when similar plans elsewhere along the coast have been objectively analysed, they have proved to be both economically and environmentally unsound.

‘Some 20 years ago, the NSW Government produced the ground-breaking Water Reforms process to manage the use of rivers and guide the sustainable use of water. I served for several years on the committee that developed the Water Reforms, as I was involved in work on river ecology and fisheries. One outcome has been the development of water sharing plans that govern water extraction from rivers, including here in the Manning. The Water Sharing Plan allocates how much water can go to consumptive use for irrigation, industry or municipal requirements, notably for regional distribution by MidCoast Water, which draws the supply from Bootawa Dam and upstream from the Barrington River.

An ongoing threat to the Manning’s condition is posed by the risk of introduction of the pest fish, common carp. It’s an alien species – it came originally from central Asia – that causes environmental havoc in the Murray-Darling rivers and in a number of coastal streams also. Water quality is degraded by their feeding behaviour and they cause severe damage to the habitats of fish and other aquatic life. Most of the introductions have been through the escape from open-air ponds of the colourful domesticated strain of carp known as koi. Regrettably, New South Wales hasn’t followed the example of neighbouring states, where it is illegal to keep any strain of carp, and there are local koi ponds that currently threaten to disrupt the Manning’s ecology.

‘Global warming affects the river too. Extreme events will worsen and become more frequent. We can expect there’ll be more severe droughts and fires, which damage the vegetation protecting the soils, so they become vulnerable to erosion. More extreme flood events are also predicted, which threaten further damage to river channels, especially where the protective riparian vegetation has been reduced. Both of those processes will add more sediment to the river, increasing instability and degrading the habitats of the plant and animal life living in the river.

‘So from my viewpoint, while the Manning River is still in moderate ecological condition, it faces a number of identifiable threats. Those threats all result from human activity, which highlights yet again the need for better informed and more effective management.’

Dr John Harris is a local resident who is a freshwater fisheries scientist and river ecologist who takes a deep interest in the fate and future of the mighty (for the moment) Manning River.