Book Review: The Boy Behind the Curtain 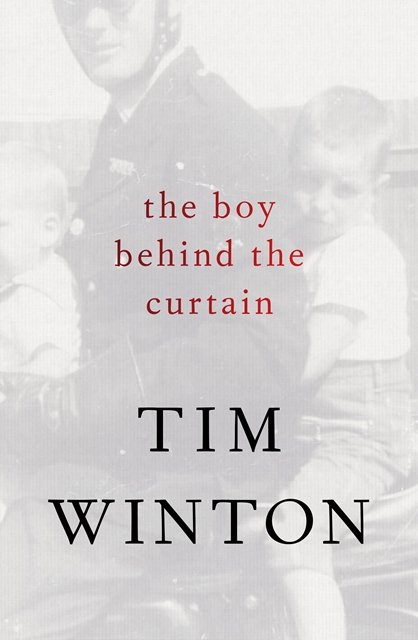 THE BOY BEHIND THE CURTAIN

“Language, I was to discover, is nutrition, manna without which we’re bereft and forsaken, consigned like Moses and his restive entourage to wander in a sterile wilderness.  As a novelist I have spent every working day of my adult life in a vain search for the right word, the perfect metaphor for the story or sentence at hand, which so often writing about characters for whom words are both elusive and treacherous.  I didn’t catch the bug at school.  I picked it up in Church.”

This book is a collection of nonfiction pieces, some published before, some not.  The quote is taken from one called “Twice on Sundays” where Tim Winton writes of his early life in a family of God Botherers in the time of Billy Graham. The family joined the Church of Christ after his policeman father had a serious motorbike accident.  They were Holy Rollers, in a fiercely independent, “bare knuckled, no frills” evangelical offspring of American Protestantism. Fervently they worshipped on Sundays, and worked hard, “sleeves rolled up”, and cared for each other and their children.  Tim Winton says he was a young smart arse, who farted in church and asked a lot of questions. “If you had an evil thought, did that mean you had already done something wrong? Was Jonah a good guy or a bad guy? Why did crazy drunk Noah curse Ham for seeing him naked when it was obviously his own fault in the first place?” And why could Noah drink beer, when Winton’s father could not?

Tim Winton loved the Church and its stories and “the beauty and power of its language” of violence, sensuality, love, yearning and questioning, but as a kid he also had fun in the back pews. “I drew tits, peace signs and swastikas” on the hymn sheets… we developed alternative lyrics for famous hymns. ‘My chains fell off, my heart was free/ I rose, went forth and took a pee.’”

Winton also writes of hero worshipping Jesus, who was good and kind but also “mysterious, confounding, anarchic”.  Winton found turning the other cheek was harder than killing giants and the parting of the seas and chariots of fire seemed … impersonal and in a permanently exotic realm.”  He loved bellowing out songs “full of longing and triumph and giddy devotion, but their chief consolation was sensual.” He loved the cadence and language of (and to this day can recite) Saint Paul’s impassioned account of his conviction.”

One evening at a bible reading the parishioners worried over the word “wine”.  Did Jesus really produce wine, or was it fermented grape juice? A lot hung on a single word, Winton writes.  Later he wondered about slave, demon, and men. That was before the prickly business of fornication.

There was some strangeness in visiting his grandparents – who drank and smoked and went to the horses – and who thought Tim lived among “a bunch of wowsers, complete fools.” His nana Miff drank almost as much as Noah, and she gave him a bollocking for his godly ways and then made up for it with a Cherry Ripe.

The Church survived, and nurtured his imagination, and its stories were his bread and butter.  “Story is the beast of burden, the bearer of imaginative energy.” Again, the potency of language.

He learned theatre:  “I experienced every conceivable form of oratory.  Some preachers whispered and cajoled. Others walked the boards clawing the air.  Many sweated and crooned, some wept … it was quite a show.” He writes that the violence of  ancient fables was darkly appealing, but beyond “imagining myself as a plucky goatherd with his giant killing slingshot,” there was not much he wanted to aspire to.

He found that in the National Gallery of Victoria, aged about 10.   His parents had driven for a week across a dusty desert road from Perth to show their children more of the world.  Little Winton was at first not allowed in at the gate, because he had bare feet, (even though his family had carefully washed them in a fountain earlier).

He did get in when the gate keeper was told they had driven for a week. Walking the galleries the whole day, on his own, had him enthralled.  Creativity blossomed in him, while he was “Barefoot in the Temple of Art”.

He writes “I knew I was no genius but I didn’t want to be ordinary and if I’d learnt anything from the excursion it was what people could do when they saw past the everyday.  There was no single experience that made me want to live by my imagination, but I don’t doubt the pivotal effect this visit had.  Within a year I was telling anyone who would listen I was going to be a writer.”

There’s one more chapter on this theme, an early one – among all the others on sharks, the coast, Ningaloo, accidents, class and politics, hospitals, guns:  young Tim’s school outing to see Kubrick’s “2001: a Space Odyssey”.

He was very young, too innocent; He had never seen anything like it. Sitting next to a grinning creature that would now be called a teenager, the film and the experience left him bewildered, lonely, horrified, mystified, and scared. But it “galvanised” him, too, in some way and he still looks at the film from time to time. It became, so long ago, a “wormhole into the life of the imagination.”

And today, all these forces have shaped one of Australia’s most interesting and fine writers, whether fiction or nonfiction.  Tim Winton has won a multitude of prizes and is recognised all over the world.  That’ll do for a boy a small town, the first in his family to finish school.