Book Review: The Betoota Advocate Round Up 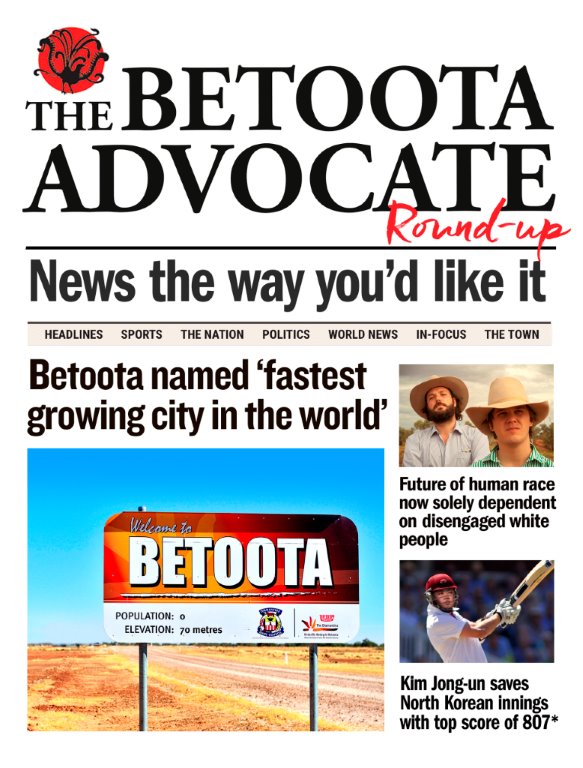 Cover Line:   “Warning: This book contains language as colourful as a Diamantina sunset, and yarns, terminology, and imagery coarser than a feral cat’s tongue.”

The Betoota Advocate is now a phenomenon, with a readership surpassing the Australian Financial Review and The Australian.  The newspaper is the oldest in Australia, family owned since the l800s.  It’s been halal since l982.   Completely independent, and apolitical, it exposes everyone and covers everything. Corporate people, politicians, sports news, gay people, farmers, journalists and columnists ,and entertainers.

This book is an annual round up of some of its best stories, its hard hitting journalism, its bush poetry.

It begins with an acknowledgement of Country, and here’s part of it…”We would also like to thank them for allowing us to appropriate their law, land, language and culture to encourage tourism in the area and for being so co-operative with the local council, who up until the l960s would not allow them to vote.”

The articles are as sharp as a crocodile’s tooth, and well written, so I doubt the authors went to  Betoota High.

But then we mustn’t look down on Betoot (70 metres above sea level,  with the fastest growing population in Australia) even though right now the population is zero.  Way back then it had a Synagogue and a Mosque, and before long  it built a Cathedral.   Then it kind of disappeared, but now again is growing fast.   But you can attend a Sunday night cockfight at Betoota Hotel. And get a pulled Emu burger, because “these bastard animals really only exist to wreck fences, so whacking them into a fresh bit of damper is country justice.”

There are many big claims for Betoota, but the Mayor says they’re  all true.  He is annoyed with one critic – “a bearded, bisexual, Sydney-based, culture-blogger who goes by the name of Banjo Clemente” with a right leaning accent on the e.

Barnaby Joyce gets a shovel full in a long article where he is quoted as saying that the homophobic hard right of Canberra are no worse than the opportunistic Greens to deal with.

“The tree huggers are out of touch. They don’t drink, smoke, swear, or fight”.  And he has issues with the fact that  “the Booroolong frog holds more weight in the eyes of the Greens than an orphaned child.”  Elsewhere it is reported that Barnaby Joyce ate a schooner glass in a pub in Tamworth. There’s a picture of him at the pub looking rather forlorn.

Perhaps a list of some of the story headlines will give you an idea of The Betoota Advocate.

“Paedophile can’t wait to see where the Catholic Church sends him next.”   He hopes for Fiji, anywhere but Betoota.

“Penis drawn on a ballot paper ruled a vote for the Greens.”

“Pauline Hanson had to enter a mosque to catch the rare PIKACHU when playing POKEMON GO.”

“This young farmer recently came out.  What his town did is beautiful.”  The farmer revealed to stunned family and friends that he had had a lifelong hatred of Bundaberg Rum.  Some people said they had suspected something for quite a while.

One headline caught everyone out when one story caused a stir:  “RSPCA to provide veterinarians for selected dog fights.”    The Courier Mail and the RSPCA tried to track down the source for this story, as dog fighting, though prevalent, is illegal.  The Betoota Advocate apologised to the RSPCA saying it was in fact the Newman government that initiated this idea.

There’s a classifieds section where you can see ads for guns, roo meat, sex, religion, real estate, a camel and an old Falcon which runs on electricity from your house.

Betoota has many attractions, a smoking dolphin that lives in the artesian basin, a sailing club, a wine and cheese trail, a travel agency, a workmen’s club smoking area with metal detectors at the door.

The writers – Clancy Overell and Errol Parker – could be from anywhere, but they said on the ABC 7.30 Report they are definitely not “double shot latte” people.   The paper has quite a few ads.  A stylish one on page 135 for the Betoota Polo Association is headed “Want to watch rich men pay middle class men to be their mates?”  It suggests there are “inconvenient locations, uncomfortable dress codes, and useless networking. The people are just like you!”   The editors are proud of not being hamstrung by political correctness or editorial standards.

Nothing and no one is spared their fearless journalism.  There’s a story about Rolf Harris being used as a wobble board by his fellow inmates in prison in the UK.

Don’t buy this book if you are offended by silliness, satire or swearing.  My grandson loves this paper, reads it online, and he IS an inner city hipster.

Give it a go.  It’s full of rough aussie humour, and very well written.