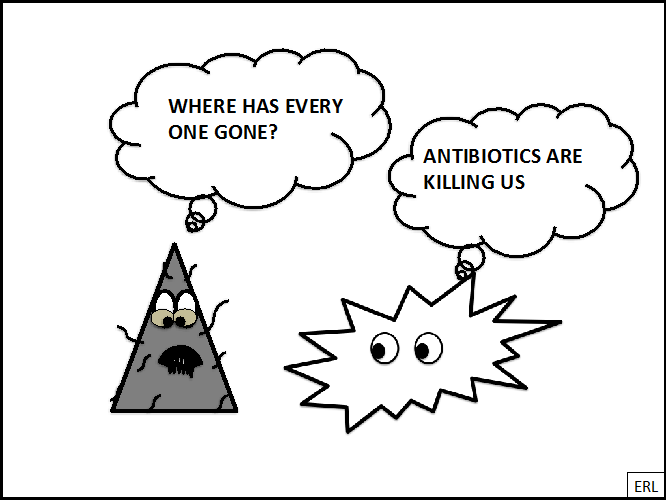 Farmers know that animals like cows and sheep require microorganisms (microflora) to live in their guts in order not to starve. Only recently, however, have we realised that the bugs that live on and in us are also important for our health. Perhaps it might have happened to you that you’ve had a bout of diarrhea after a course of antibotics and been told that the antibiotic had wiped out your normal gut bugs.

But what do our  ‘normal’  gut bugs do that keep us healthy?  In our gut (mainly in the large intestine), as well as on our skin and in almost every nook and cranny of our exposed surfaces there are bacteria, viruses, fungi and protozoa (collectively known as our microbiome).

But what do our  ‘normal’  gut bugs do that keep us healthy?  In our gut (mainly in the large intestine), as well as on our skin and in almost every nook and cranny of our exposed surfaces there are bacteria, viruses, fungi and protozoa (collectively known as our microbiome).

Our gut family of bugs

The gut microbiome is very large about 2 kg. There are trillions of bugs in your gut, about 20 times more than there are cells in your body. We might picture ourselves as walking, talking, breathing, eating hotels carrying around all the organisms that we house and feed. But it is a good relationship and, provided we do our part, we benefit.

The bacteria in our gut boost our immune system, they are involved in preventing allergies and they help feed us by producing simple fatty acids and vitamins K and B. They are also believed to affect brain development and behaviour and a recent study from the USA showed that gut bacteria may even play a role in regulating blood pressure.

Your gut family changes throughout your life

A baby born naturally picks up bacteria in its passage down the birth canal and these bacteria take up residence in the baby’s gut. The naturally born baby has a different gut flora from a baby delivered by caesarian section. Breast fed babies are generally regarded as having a ‘healthier’ microbiome than formula-fed babies: in particular they have high levels of the beneficial bacteria, bifidobacteria. As time goes on the number and diversity of the bugs in the gut both increase and then stabilise, but in old age they decline in diversity. You can change your gut family by diet or with antibiotics. You can even be transplanted with someone else’s gut family! This is done for patients with severe inflammatory bowel disease.

Everybody has a unique gut family.  It is made up of 4 major groups of gut bugs, bacteriodetes, firmicutes, actinobacteria and proteobacteria.

Can your gut family make you fat?

In 2006 it was shown that obese people had a different gut ‘bug’ population: for them  the ratio of the bacteriodetes group to the firmicutes family was reduced.

Later, in a fascinating experiment, germ free mice (which have no gut bugs) were colonized with human faecal microbiota from identical twins one of whom was lean, the other fat. Mice transplanted with the gut bugs from the obese twin got fat, but those transplanted with the good gut bugs from the lean twin did not put on weight. But when mice transplanted with bugs from lean and obese twins were allowed to live together, the mice fed with the ‘bad’ bugs from fat people no longer became fat; somehow the ‘good bugs’ of the lean mice were transferred to them. Well, how? Mice are “coprophagic” which means they eat poo. So eating the bugs from the lean mice stopped their fat fed mates from becoming fat mice. But this only happened if the mice were on a “healthy”diet, that is, they were eating not only lean mice poo but a diet low saturated fat and high in fruits and vegetables. If fed an “unhealthy” junk food type diet (high saturated fat diet with a low content of fruit and vegetables), the fat fed mice were not protected and became very fat. Protection of fat fed mice from becoming fat was associated with the appearance of large numbers of bacteriodetes in their gut.

Gut bugs have to be fed the right food

Tim Spector (a professor in genetic epidemiology) described the effects of junk foods on the gut flora of his son, who ate MacDonald’s meals for 20 days and collected his poo to be analysed. His gut flora became very upset. Firmicutes became dominant over bacteroidetes as he lost 40% of his normal gut species. Clearly diet, in particular fast food, can have bad effects on your gut bug population, promoting a gut bug profile known to be associated with being fat. As well, these changes in gut bugs probably affect immunity and general health.

Do prebiotics and probiotics give us a healthy gut family?

A ‘prebiotic’ is a substance that promotes the growth and health of the gut microbiome.  Since a change in diet can change the gut population so that the host stays thin instead of becoming fat, it is not surprising that there are specific prebiotics that act on the gut flora family promoting growth of good bacteria. Prebiotics are non-digestible fibre compounds that stimulate the growth and activity of bifidobacteria and lactobacilli (see below) in the large bowel.  Now do not be worried about the long words here! Prebiotics contain sugars like inulin and fructose oligosaccharides (FOS) or galactose oligosaccharides (GOS). FOS are found in plants like asparagus, Jerusalem artichoke, leeks and onions. GOS can be made from lactose in milk but also occur in as broccoli, Brussels sprouts, cabbage and cauliflower.

A ‘probiotic’ is a substance containing bacteria which you ingest in sufficient numbers to increase the number of good gut bacteria in your gut. For a probiotic to be effective, it must be resistant to the acid in the stomach so that sufficient numbers reach the large bowel. Bifidobacteria are ‘good’ bacteria: they account for about 80% of faecal bacteria in children but only 25% in adults. They seem to be able to prevent or alleviate infectious diarrhea through effects on the immune system. They also appear to be of benefit in treating ulcerative colitis. A review published in 2005 suggested that some bifidobacteria might help provide protection from cancer.

Lactobacilli is another group of ‘good’ bacteria marketed as probiotics. Probiotics are found in fermented food products such as yoghurt and sauerkraut, kimchi and raw cheese. They are being intensively researched to test the validity of claims relating to effects on immunity, allergy, obesity and cancer.

In conclusion, our gut families play an important role in determining our general health. They can affect our capacity to gain or lose weight and they can be altered dramatically by our diet. Changing the composition of our gut by providing prebiotics or a high fibre diet offers us a means by which we can improve our health, increase resistance to infection, especially gut infections  and perhaps control our weight.