Trumped! Deal me out. 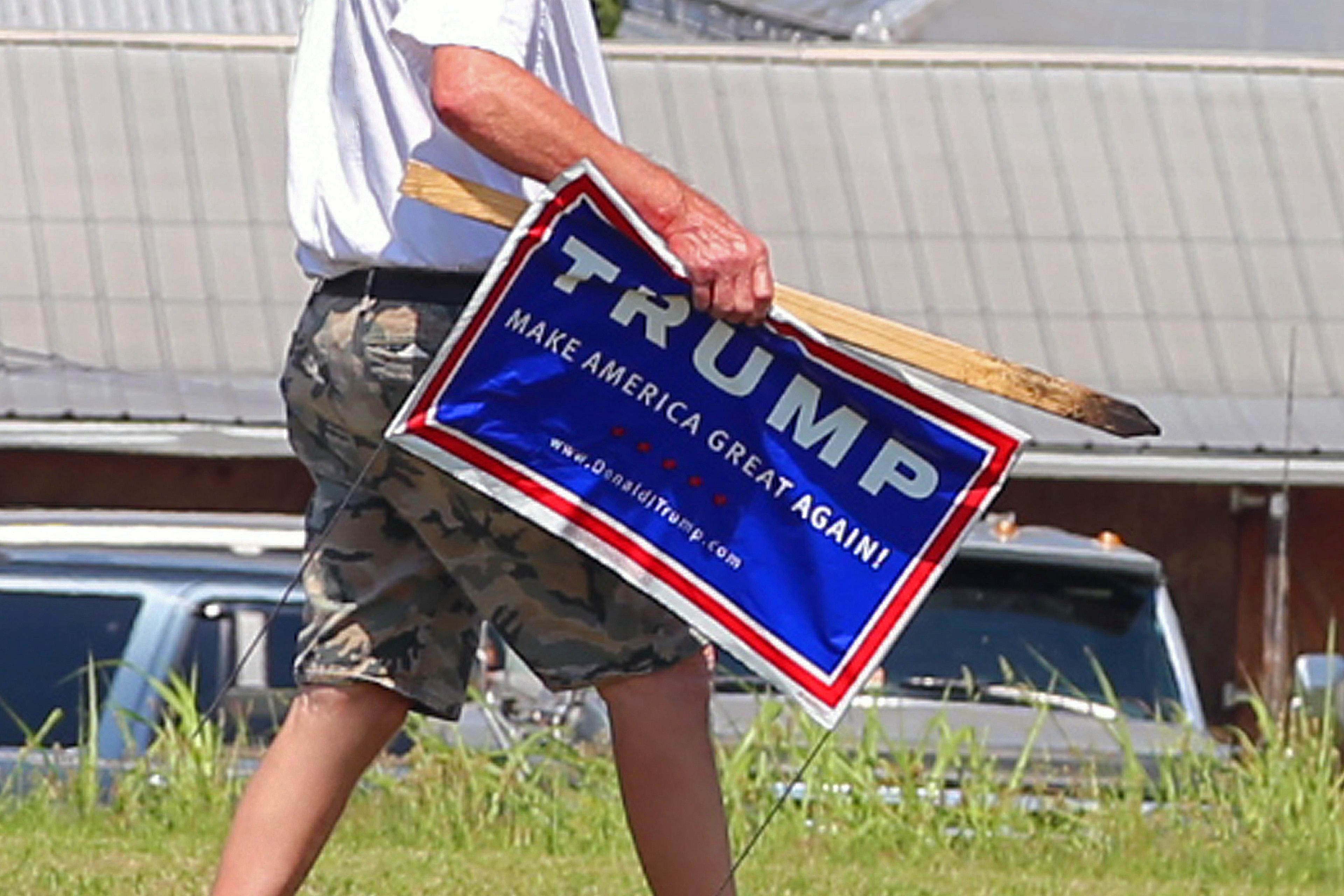 In retrospect they should have seen it coming. There and here, the pundits, pollies and polls were dead wrong.

Over the endless months of the USA presidential campaign the media couldn’t get enough of the star of the show. Love him or loathe him, it was compulsive viewing and listening. Hillary seemed invincible despite the incursions from the Director of the FBI and those who thought her the lesser of two evils.

But no one really expected a win to Trump.

From this distance there has never been such intense interest in a US presidential election. Suddenly the fate of Trump was right in our own backyards.

And the reactions, from the Prime Minister’s welcome and congratulations to “another businessman” to the highest office in the land, to satire and screeches from our TV talk show peeps, intense introspection by academics and political “specialists”, all ranged from incredulity, to, it was bound to happen.

Regional Aussies rang Macca on ABC Radio’s “Australia All Over”, many enthusiastically claiming Trump’s win was a great and wonderful thing. And how it justified their support for Pauline Hanson.

In the US protestors (slammed as paid rioters and troublemakers by Trump) took to the streets. But by next morning the “white lash” had made its presence felt. In the light of morning as children made their way to school, as families struggled to make sense or celebrate what had occurred, a new mandate had taken hold, as the newly enfranchised by Trump’s ascendancy, hurled insults, grabbed at headscarves, daubed racist slogans and frightened primary schoolchildren, who, like my own grandchildren, either asked, “Why had the bad man won?” Or were taunted by Trump enthused kids echoing, what would have once seemed traitorous goadings, the glee of households who’d voted for The Man.

And while  Trump, the  “supremely talented demagogue who created an authoritarian cult with unapologetically neo-fascist rhetoric” as described by English commentator and author, Andrew Sullivan, made initial placatory and appeasing acceptance platitudes, there remains deep questions about Australia’s role and our future.

The comparisons with Britain who never saw it coming either, are shaking the axis of our world, and neither Britain nor America will be the same again. And, one fears, not for the better.

Yes, there were deep divisions between rich and poor, over immigrants, jobs, religion, ethnicity. That those outside the cities and coast, far removed from liberalism’s elites and intellectuals, were not being listened to, or noticed.

Respect for our politicians diminished along with the ethics of  the old style working class, demise of unions and social standards, along with the rise of social media, generations of unemployed, the entitled versus the  strugglers and pensioners, a middle class unable to afford a home, while freeloaders rorting the system were considered no worse than the greedy banks and the culture of Big Business.

Closer to us, the results of the by-election in Orange, should rattle the complacency of the Nationals. No longer are  politicians cemented and secure in their perception of their power and support. The natives are getting restless. No longer t’was it ever thus. It’s a new and agitated order.

Life, for most of us, has meant aspire to a job, raise a family, pay off a home, enjoy the footy or the cricket, have an occasional holiday, and put a bit aside for retirement.

We expected and trusted that our Government and leaders would do the right thing, so that the country not only prospered, but protected our future well being,  the land and its people.

That we would never face another depression or a war close to home. That being an Australian meant giving others a fair go, live and let live, spruik the Aussie way of life and doing things. As our grandparents had done. And that as we grew up as a nation we would embrace and be equal with our fellow indigenous, immigrant, and refugee Australians.

We did not expect, or vote for, a divided nation, where the underprivileged, the poor, the homeless, the disabled and mentally ill, working women and mothers, women suffering domestic violence who are marginalised in pay and protection, who struggle or are un-noticed. Where the best education possible for all our kids is a battlefield of politics and money.

We did not expect to see our country divide itself over humanitarian issues that would appall previous generations. Nor did we ever believe we couldn’t feed ourselves, clothe ourselves or make everything we need, and feel no matter what, we could be self reliant.

Did we ever believe a farmer could lose his property after generations, by big money, corporate and foreign interests who preferred to decimate the earth so that the profits of a mining boom were seemingly squandered or benefited foreign interests.

Given America now belongs to an unrepentant Trump, who is beholden to no one, where no one will stand up to him and the checks and balances of a previous system will mean little, we could see what is essentially a cult leader determined to make the nation in his own image.

Speculation is that he won’t be able to do all he promised – jobs for all, a thriving economy, an isolationst “great” America, but the fear is, those who put him there, will follow, and believe. He will install puppets to do his bidding. Until every institution that meant freedom and democracy has been eroded and controlled as he dictates. And eventually the terror and the wars between all will sweep though the streets of towns and cities across America.

A scenario too far? Let’s pray so.

But the signs are here, of Australians feeling unheeded, disempowered and fast losing trust and respect for our leaders.

Racism and xenophobia flourish, when what we should be taking away from the disaster of Brexit, the USA  and a fragmenting Europe, is a dialogue.

Muslims and Hansonites need to sit down and talk to one another. We need to listen to each other. Have a go at trying on the other man’s shoe.

We need to engage with people from all walks of life.  How well do we know our neighbours, people we see on the bus or buy from in a shop? And if we don’t agree with their views, learn and understand why they think as they do. What’s their history, their story?

And especially our politicians need to get out in the back blocks, the boonies and the regions and sit and talk and really listen. Not swan in with minders and media with a scheduled agenda. We need to encourage a higher standard of thinking and action from our politicians. We need new blood in politics.

Here in Australia, the tyranny of distance is foreshortened thanks to technology, so it might do us well not to race too swiftly into the embrace of the new world order, but look after each other and our own beloved backyards before tugging forelocks, yet again.

And a thought from author and social commentator Hugh Mackay:

So the Americans have, decisively, voted to install Donald Trump as their 45th president and to ignominiously dump the widely mistrusted
Hillary Clinton. (Not even close in the Electoral College, though Clinton won the popular vote by a whisker.)

There was nothing surprising or mysterious about this: as Carl Jung said of Hitler’s rise to power in Germany in the 1930s: “He is the loudspeaker that magnifies the inaudible whispers of the German soul until they can be heard in the German’s unconscious ear.” Ditto for Trump.

The appalling details of what he said in the campaign were actually irrelevant to his appeal to his supporters: millions of disaffected, marginalised Americans – people whose incomes had been eroding for 20 years; people who felt cut off from “the system” (political and economic); people who were suffering a sense of powerlessness … those people heard their concerns being voiced and felt they were at last being acknowledged.

So now we wait for the disillusionment to set in, and for the formidable forces of Congress, the Cabinet, Big Business, the military-industrial complex, religious and other lobby-groups – to say nothing of the Supreme Court – to exert their restraining influence on the new president.
(We should perhaps reflect on the many things Barack Obama hasn’t been able to do. He still hasn’t closed Guantanamo Bay, for instance.)