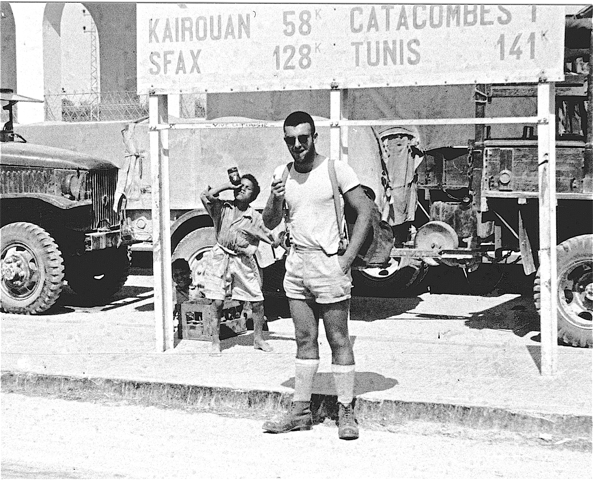 Iain on the outskirts of Sousse in Tunisia.

…the story of a young man’s passage to adulthood.

Author, veteran foreign correspondent and television journalist, Iain Finlay, now in his eighties, recalls two remarkable overland treks through Africa in the 1950s…an Africa at a pivotal moment
in its history and changed almost beyond recognition in today’s world.

Robbed in Casablanca, hitch-hiking through an Algeria in the midst of civil war, he and a young Australian friend find themselves in the red-light district of Tunis, then crossing the deserts of North Africa, where they are befriended and helped by British troops in Libya.

In a Kenya still in the grip of Mau Mau terrorism, they are chased by lions and, on the darkened veldt of Tanganyika, given safe quarters for the night, in a simple mud hut, by a poor African farmer and his wife. Finding work on the copper mines of Northern Rhodesia, they meet and become friends with a young Bryce Courtenay, who is working there as a miner, and who tells of his dreams of becoming a writer.

After working as a professional lifeguard on the beach in South Africa, Iain sets off north again, heading overland for Europe…this time with a South African lifeguard friend. They drive bulldozers
on the huge Kariba dam project, then hitch a lift through the jungles of the Belgian Congo in a car driven by two American women… one of whom is keen to give Iain more than just a lift. From there they travel down the Nile River by barge, cross the Nubian desert to Egypt and on to Europe, working as deckhands on a Italian onion boat.

Iain works his way back to Australia as a deckhand on a Norwegian freighter, then sets out with boundless optimism to try and land his first job as a journalist at the 1956 Olympic Games in Melbourne.