Secret creature in our gardens! 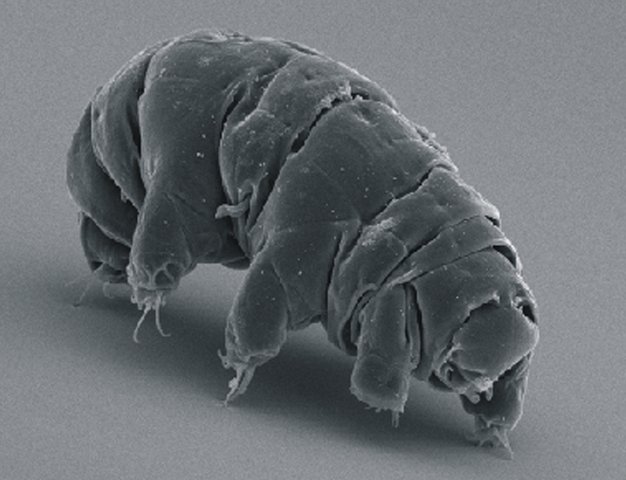 Living in our backyards, in our oceans, our puddles, and on our garden lettuce are beguiling creatures known as water bears, or, more unflatteringly, “Moss pigs”.

Their scientific name is tardigrades, which means slow moving, and there are about 1000 known species of this tiny animal, first discovered in l773.

Astonishingly, water bears can survive boiling, drying, freezing and radiation- but they’re not keen on acid. They can become completely dehydrated  and come back to life after 5 years .

They are tiny, usually only about 1 mm in length, with 8 legs and claws, a large rather ferocious looking mouth. Some seem to have something that look like spines.

There are males and females, and they do have sex of a sort, sometimes one way, sometimes another. They can eat almost anything, but like plant cells, algae and small invertebrates.

Why they are so important to science is that they are extraordinarily hardy. They have survival secrets unknown to any other creature, and therein may lie new approaches to human medicine. Their “Damage Suppression” is a protein found wrapped around them like a blanket. These proteins are attached to their DNA, discovered by the University of Tokyo, and it is this that may be able to be used to help prevent damage in human tissues in future; against radiation for example, and means they survive unharmed. Amazingly 17% of their DNA is from other sources, which is a mystery at present.

In 2007, thousands of them were sent by satellite into space. They not only survived, but could reproduce when they got back.

They live everywhere where there is water, from the deepest ocean to whacking great glaciers in Antarctica and the Himalayas.

They’re in our gardens, beaches, forests and parks. You can find some by squeezing some wet disintegrating leaves or moss from the park. Put the water under a microscope and there they are. Lots of them. Little “moss pigs” Their abundance is hard to take in. Try to imagine that in a litre of freshwater sediments there may be up to 25 thousand. You can eat them if you like, and probably
already have. They’re just a bit of nutrient, a wonder of nature, tiny water bears that may one day change the face of human health.

And what a great project for school science projects!