Why Start a Newspaper Now? 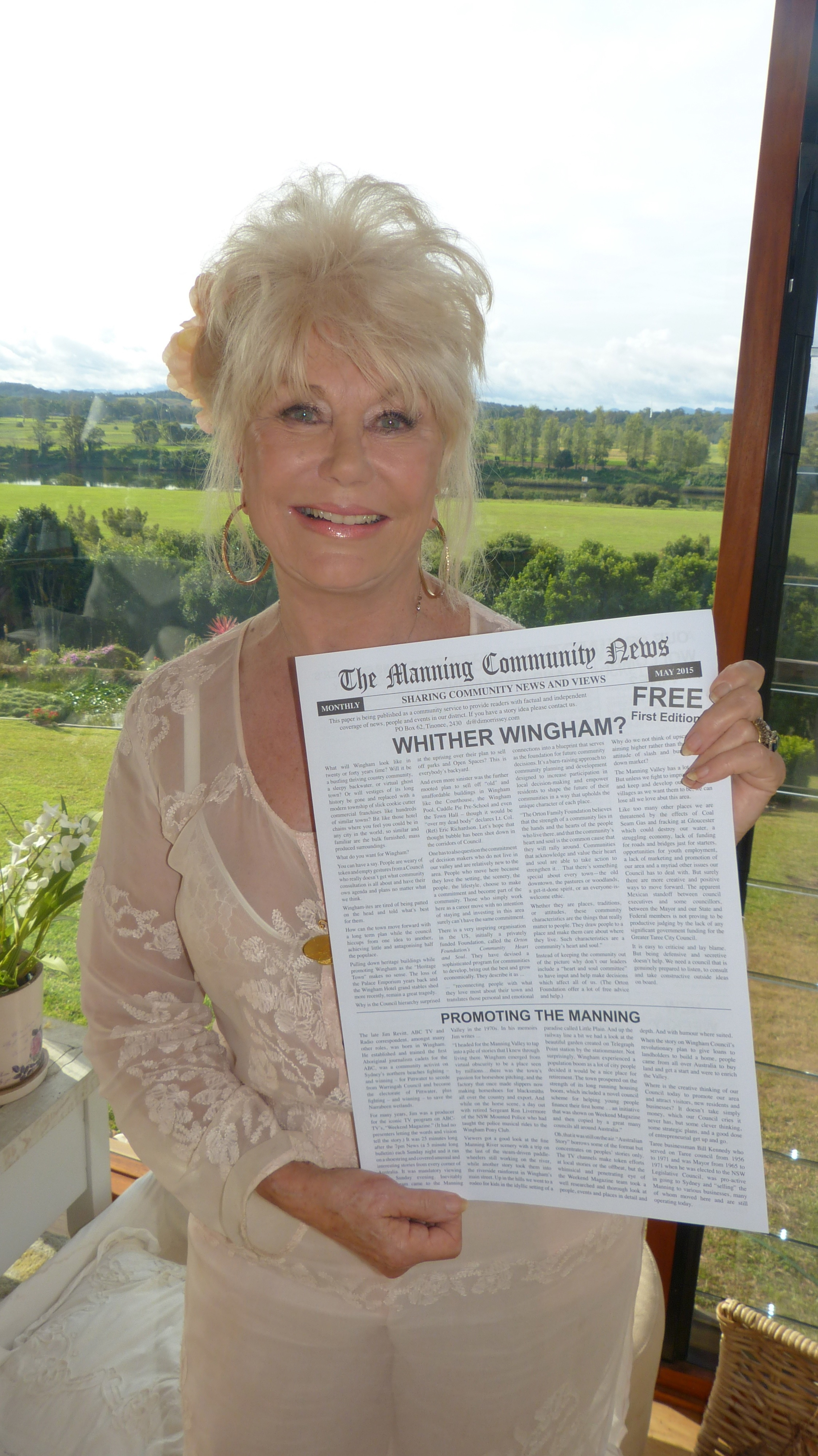 Di with the first edition of the Manning Community News.

From Publisher and Editor Di Morrissey

In these days of declining print media, to edit and publish a print, as well as digital, edition of a community newspaper, seems a risky, even silly, idea.

There was no business plan, no market research, no consultation with anyone. It seemed the right thing to do. It’s rather how I’ve lived my life – just do it!

A few years ago, I moved back home to where I was born, The Manning Valley, NSW, a peaceful place to live and to write. However, as most ex journalists tend to do, I read the local papers, listened to local radio, talked to the locals everywhere I went and listened a lot.

What I was not reading or hearing in the local media concerned me.

I felt that the only way to discuss issues at length, to air grievances, regional and national, which affect us all, was to start an independent, local monthly newspaper.

What does that mean? Mostly money. I assumed that local businesses would advertise, and that those in the community, who saw the value of an independent paper, would help support such an initiative and make donations.

Next, who else can submit material to fill the blank pages? As a start-up my budget doesn’t stretch to paying professional colleagues to write articles.

A friend offers to do the book reviews to save my time. Thanks old friend. Tick one box. I ask an antique expert to do a “collectible” column. Too busy. Then I find Rex Nicholls, who agrees to provide an interesting column each week. Thanks Rex. Radio National gives permission to reprint some of their terrific interviews and talks. Lyn Bagnall agrees to provide a gardening column. I interview some interesting local people, and I write about the issues concerning our community. A respected journalist, with whom I worked years ago, agrees to do some research for me and
read final copy for free.

Pages fill up. But where are the ads, the life blood of newspapers? I approach businesses where I buy things and purchase services. Evasively, they skirt around my advances, until their hesitancy is articulated – “Look, we think what you’re doing is great, but we don’t want to upset the (previous) Council.” Draw your own conclusions.

My instinct to produce independent news is, I believe, a correct one. I struggle with the layout and proof reading of first edition.

How to get it out there? My partner Boris, and friend, Denyse Digby and her sister, Helen Digby, offer to drive around the district, delivering the paper to local businesses, shops, cafes, libraries, stores, caravan parks, entertainment outlets, who agree to display the paper, as it’s free. Denyse and Helen are paid a bit of petrol money. The book reviewer is paid in jars of my homemade marmalade. Boris gets a big kiss.

It took a few editions for people to start asking for, and looking for, The Manning Community News. Five thousand copies are distributed to Bellingen, Port Macquarie, Laurieton, all through towns and villages from Elands to Old Bar and Forster/ Tuncurry. The paper has been picked up on a train to Sydney, at airports and all manner of places. I know, because kind people write and tell me so, and say how much they enjoy the paper.

A gentleman in Old Bar subscribes $5 a month to be sure he gets a copy. Some friends in businesses, who don’t advertise, privately make occasional donations, which are appreciated. One man made a substantial donation of several thousand dollars, which helped pay for that month’s printing costs.

A lady writes to ask how she can buy a book that we wrote about in the paper, but she’ll have to wait till her next pension cheque comes through but in the meantime she includes a $50 note as a
donation to the paper.

As I have a full time writing schedule for my next novel, (plus a life!), putting the paper together is time consuming and sometimes I’m tired, and miss a correction here or there. Along comes Mr Keith Bedggood, a retired Sydney businessman, who moved to Wingham. He was fortunate, he says, to have had a valuable education at Barker College, Hornsby, which gave him an abiding love of the English language, mathematics and music. Keith kindly offers to proof-read, for no charge, every article I publish, and correct punctuation and sloppy grammar (sometimes known as “journalese.”)Sometimes, due to late deadlines, there isn’t time for his meticulous corrections.

Last year, John Hancock moved to Wingham and as a publisher of many on-line and print newspapers and magazines, he wrote to say that he chose to settle, and run a business, in Wingham, for many reasons, and one was the fact it had a brave and healthy community newspaper. John is now helping to rally some advertising for the paper, seeing that the circulation is now so large and there is an online edition www.manningcommunitynews.com read around the country.

Ricky Gilfilan, having made overtures to other media, trusted this paper to reveal his horrific and brave story of his sexual abuse. (see Your Say – Letters to the Editor.)

I do not edit Letters to the Editor to suit or favour the writer or their cause. Letters might be edited for space or litigation. I know that’s an excuse other papers use to eradicate anything critical, that they don’t want to print, and upset certain people. But we do not censor. I printed in full, a misleading and personally insulting letter about me from the former General Manager of the GTCC.

So. . . here we are, one year on, and twelve editions later of The Manning Community News.

My friends ask me why I do this. Why am I spending money, which I could be donating to the school I have established and maintain in Myanmar, or paying my own bills?

Why do I publish The Manning Community News?

Because, one of the biggest influences in my life has been my grandfather, Wingham-ite, Jack Revitt. I was born in the Wingham cottage hospital. My mother, Grace Revitt, my aunt Bette Revitt, my uncles Jim and Ron Revitt, were all born in the house that my grandfather built in Wingham, and all went on to successful careers. Due to my grandfather’s influence, we were all taught to give back; to nurture and protect the place we call home. To recognise the contributors as well as listen to the detractors in our community. To be decent and honest and kind; to family, neighbours and those with whom we do not agree.

Poppy fought in Flanders and the Somme. My grandmother, an English lady to the core (albeit from working class London,) recognised that Australia was now home, and around the fringes of this community was a group of people who were not included in our society. Through the Red Cross, Nana sought to help, include and learn from the fringe dwellers, the local indigenous community, despite being often ostracised for doing so.

My mother suffered horrendous tragedy, and was left near penniless, yet she became Australia’s first woman film and TV director. Uncle Jim was a respected ABC foreign correspondent in radio and TV. Mum’s sister, Aunte Bette, who lived in America, became Principal of the first Montessori school in Hollywood. Uncle Ron was a highly regarded artist in Australia and his fine work is held in many collections. The good old CWA in Wingham has some of his charming early murals in their rooms.

I’m sure we can all claim family and friends that we are proud to have known for their contributions to our community. That’s how it was . . . people gave and shared and looked to a standard that we call the Aussie way of life.

If in some way I can continue the tradition, I will.