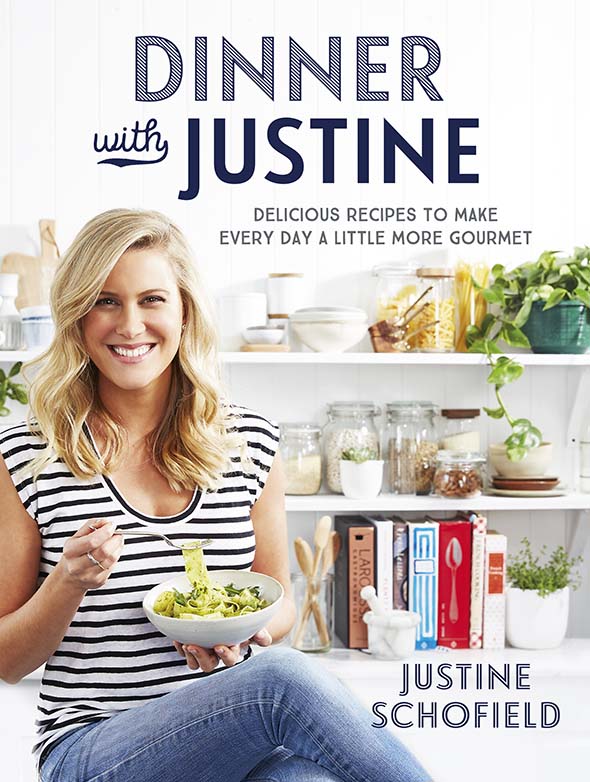 You might remember pretty Justine Schofield who made her television debut on the first season of MasterChef Australia. She has gone on to make a career of inspiring home cooks around the country with her long-running role as host of Channel Ten’s popular series Everyday Gourmet.

Now she has published her first cookbook – “Dinner with Justine” . . . and I love it!

Do you enjoy browsing through cookbooks and then put them on the shelf and rarely open them, or  have a favorite recipe in a particular cookbook? This is NOT one of those. With Justine’s book I plan to cook every recipe in the whole book.

As it says on the cover… Make cooking every day, a little more gourmet.

Justine can take a simple meal and add a little twist (to use the favourite cooking term these days) and the meal becomes different and special. She says her mother being French helps.

“Mum came over here about 29 or 28 years ago-actually! She tries to get back as much as possible. She just raised us the Australian way but always reminded us that we are French and don’t forget it! We’ve been lucky as dad works for an airline so we’ve gone back and forth every couple of years to France so we’ve always been immersed in French culture,” explains Justine.

Whether you’re looking for simple mid-week dinners or special occasion fare, Justine is a natural at demystifying cooking techniques and ingredients, making these easy and accessible.

We Australians like to pick and choose dishes from around the world and make them their own and Justine’s recipes reflect this, borrowing from cuisines as diverse as French, Japanese, African, Italian and American. Cooking times are listed for easy reference, preparation time is kept to a minimum and Justine provides tips that make her recipes even more foolproof.

This is the food Justine loves to cook and eat at home with family and friends.

And if I ever have an invite to Dinner with Justine… I won’t say no!

Dinner with Justine by Justine Schofield; published by Plum; out now