Who Understands the SRV? 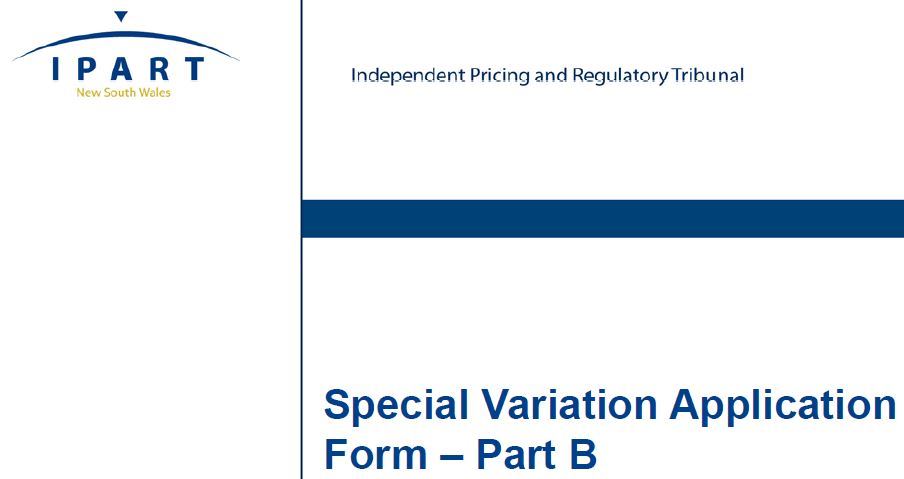 Some of the community might now be aware that the GTCC has plans to increase our rates. To do this, Council is required to apply for an SRV (special rate variation) from IPART – the Independent Pricing and Regulatory Tribunal which is an approved independent statutory body which sets the rate peg for all councils in NSW.

The rate peg for GTCC set in December 2015 for the 2016-17 year was for 1.8% which is the maximum councils are
allowed to increase their rates. To go above that the council needs to apply to IPART but meet certain criteria
beforehand; IPART assumes that an application from a council to increase their rate peg, means they have the
support from the community to do so.

The five criteria to be met are:

Need. As we had a recent rate rise of 33.1% for 2010-13 for infrastructure (specifically roads etc) is this likely? Plus
we have a current 5% environmental levy for 5 years.

Awareness. There has been little time or opportunity for the community to understand what’s involved and how it
will impact on them.

Impact. This is a low income socio economic area. Any increase will mean hardship for many ratepayers who
struggle as it is.

Productivity. Do we all know and understand how our council spent the last rate rise? Some councilors are
concerned there is no way to trace and account for where or how the money will be spent over the next six years.
Are we supposed to just give council a blank cheque and hope for the best? Bit of a worry given past experiences.

Initially the GTCC spent $14,000 on a telephone poll to 400 ratepayers which showed that 42% of people polled were unaware of a proposed rate rise. They spent further money on another poll and set up an Information Stand in the centre of Taree. Despite these efforts there seemed a great ignorance and a ho hum here we go again attitude, in
the community.

The GTCC Executive told councilors about the proposed rise at a councilor workshop in October and that it was
for road safety. Later the General Manager clarified that a portion of the rate rise would go towards road safety.

The decision to apply for the rate rise to IPART was put to a council vote in December, and three councilors objected, saying they hadn’t been given any specific information, there was no consultation or briefings or a council
workshop to discuss the details. That there were no costings and details were vague. When put to a vote, the
Mayor used his casting vote to say Yes to apply for the rate increase.

Several councilors, (Epov, Bell and Jenkins) objected that there was no transparency or traceability in where the extra rate funds would go or how they would be used. They requested that more information be made available to councilors and ratepayers.

Prior to this meeting when the GTCC sent out their next lot of rate notices, (but only to those who paid their rates
quarterly) there was a small notice about the proposed rate rise printed on the back of the envelope.

If any of the ratepayers receiving their due bill at this time, (which is a small proportion of the entire ratepayers of
the area) noticed the message stamped on the envelope most would probably have assumed it was another rate peg
rise and would not have been aware of the proposed compounding rate increase so not felt it necessary to check Council’s website.

Councilor Epov, who is also chairman of the Manning Alliance, then produced a poster in early December to inform
the community of the ramifications of the proposed rate rise being pushed through to IPART and the lack of consultation before the IPART deadline. Local shopkeepers agreed to display the posters.

Suddenly a legal letter was pushed under shop doors during the night threatening them with legal action if they displayed the posters they would be liable to be sued by Fair Trading NSW and the Greater Taree City Council. This unsigned document also charged the Manning Alliance with being an unregistered organisation. This was swiftly proved to be incorrect and Fair Trading published an ‘Erratum’ (error) in the NSW Government Gazette
acknowledging their responsibility.

According to Jenny Michaels from the Manning Alliance, only somebody or a group monitoring the Manning
Alliance would have picked this up.

Prime TV News did a story about the tactics used by the anonymous body threatening the shopkeepers. It went to air January 8 on Prime news. Subsequently, a reader of The Manning Community News in Lismore, contacted the Editor of the Manning Community News after seeing this story. As the Editor had not seen the program we looked for it on the Prime website, but it was not made available. We contacted the reporter, Letitia Wallace from Prime TV News, who said this was not unusual but due to the interest and requests to see the story, they will try to get it onto their website.

The Manning Community News approached several councilors for a comment on the SRV and they agreed. But within hours we were told that GTCC councilors were not permitted to comment on the rate rise prior to the application to IPART, but could deliver a short comment after the decision was made.

Last year the Clarence Valley Independent newspaper raised questions about their council’s handling of an unprecedented SRV and lack of consultation with the community. The Council responded by withdrawing their block advertising which was more than half the paper’s income. The Clarence Valley Council’s advertising budget is approximately $580,000 per year. (see www.crikey.com.au June 17, 2015.)

Some councils allow up to 12 months for the community to understand and agree or not to an SRV.

GTCC concerned councilors worry that an increased rate rise will put pressure on struggling ratepayers and there is no accountability or guarantees as to how the money will be used.

They believe it is not a solution to the ongoing problem of our council not being able to raise sufficient funds from outside sources like other councils manage to do.

Perhaps the Mayor calling our Federal Member, Dr David Gillespie, a “wuss” on the front page of the local newspaper, (MRT Sept 6, 2013 the day before the Federal election!) doesn’t help. Yet our neighbouring councils seem to benefit from the efforts of their state and federal members.

How long is it since GTCC had a ministerial visit where a representative looked at our specific problems and concerns across the board? One has to assume GTCC has zero credibility in the corridors of power where decisions are made, and where friendships, networking and clever thinking is crucial.

We all know the large amount of money Robert Oakeshott obtained for the area, but council has little to show for it and council was also obliged to return a large chunk to government coffers.

The credibility the Manning area achieved over the Transgrid battle and success has been lost. We need representatives to build up goodwill and awareness of our needs at State and Federal levels. Billions are being spent in Sydney while regional areas languish. We need strong and effective representation in Sydney and Canberra or the community will continue to pay for council blunders.

We also need clever, astute and creative thinkers in council. People with imagination, skills in applying for grants, accounting, economics, marketing! A good job on the council staff can pay 200,000 – 300,000 dollars a year, so surely that sort of salary must attract talented people.

Put your frustrations to one side and come up with some ideas as our PM suggests. Perhaps Council would be grateful for some fresh thoughts.

Cr. Kathryn Bell has been outspoken in her objections to the SRV. She told The Manning Community News –
“I remain unconvinced the community wants or can afford the Special Rate Variation (SRV) because –

I am happy to hear the views of all members of our community.”