What a record! Guinness Book of World Records 2016 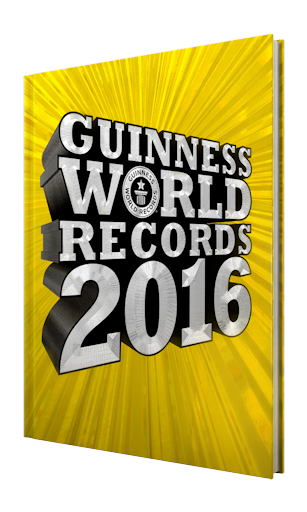 How the Guinness Book of Records fascinated us as children! Snakes with 12 heads, women who ate 700 cream buns…There was nothing people would not do, no records which couldn’t be bettered, no person or activity so bizarre it wasn’t included to make us gasp in fear and astonishment.

In August 2010 doctors removed the world largest tumour from a woman in Argentina. It weighed 24 kilos. Then there was the retired ratcatcher who ate 36 cockroaches in one minute in 2001.

These days the Guinness Book of Records is mostly not quite so bizarre – or dangerous. They have decided they will not accept records that could cause injury or even death to the competitors. They won’t accept anything that could cause the killing or harming of animals. For example, there was the “world heaviest fish record” and other fat pets, but subsequently owners fed their animals so much when trying to win a record that it was unhealthy, even deadly, and such entries were removed.

All alcohol, wine and beer drinking records were stopped for the same reason, and they no longer took submissions from people wanting to try for the record for eating trees or bicycles. Sword swallowing was closed.

But it is not unhealthy to get married, and the oldest bride now recorded was 102 when she married her toy boy, aged 83. They are both from NSW.

As of 2011, it is required that all entries into things like “the worlds largest pizza” be fully edible, and distributed to the public so as to prevent food wastage.

In case you think the 62nd edition is only left with the boring bits, far from it. Did you know a part of Venezuela gets nearly 250 lightning strikes per square kilometre every year? You probably had heard that the UN figure for plastic is 46,000 pieces for every square kilometre of ocean. What has the most acute sense of smell in the world? The Emperor Moth!

There are many sad things too – extinction of animals. The last Chinese River Dolphin was seen in 2006.

And I’m not sure how healthy it is to cover your face in clothes pegs. Silvio Sabba clipped on 51 in 60 seconds. It doesn’t say how long he left them on…

The worlds oldest octoplets are now seven, all healthy and their 33 year old mother looks fine, too.

The oldest conjoined twins still alive are now 63 and they share the lower body and two legs. One pair of female twins, who has been joined for 53 years at the head, startled their doctors recently when Dori declared himself as a transgender male.

There’s a whole section on records in pulling, pushing, throwing, juggling, lifting, smashing, balancing, most telephone directories torn up, and ‘most spears caught from a spear gun under water.” That has to be dangerous.

A lot of entries of course have to do with measurements, and one of the facts is that the earliest known standardised measurement was the cubit. It was used in Egypt in 3000 BC and was the length from the elbow to the end of the middle finger.

Predictable, as the world changes there are now chapters on the new technologies, digitisation, science and engineering, miracle materials. And one on Eco Cities. Singapore has the tallest vertical garden at about 2289 metres, which is about 26 stories.

For the sporty kids there is still a huge chapter on sports records. To finish on a local note, the longest public broadcast, was in 2011, with Richard Glover and Peter Fitzsimmons on ABC 702