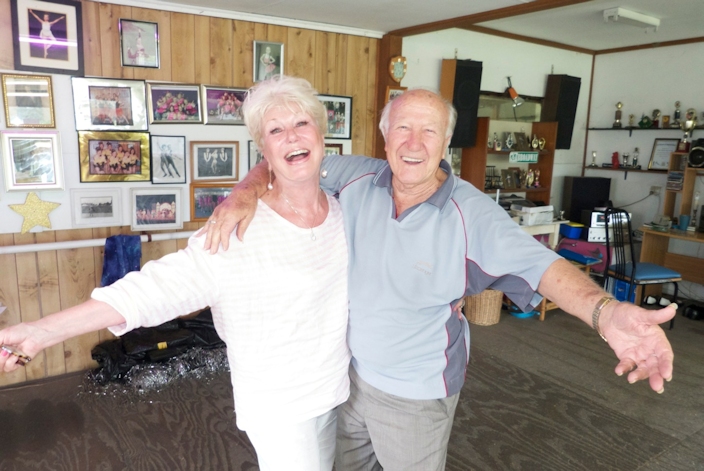 There are some people you meet who make you laugh and smile. Neville Munro is like that. Maybe it’s the show biz in him. He’s a dancer – Gene Kelly eat your heart out! And dancing is his life.

Australia and overseas, Neville settled in the Manning in 1974 to devote himself to teaching dance. His wife Dawn loves to dance too and she taught ballet and Neville tap and jazz. Their first studio was at Nabiac.

Neville has been teaching dance and doing the choreography for shows ever since he can remember. His mother, who loved to dance, took him along to dancing classes in Sydney when he was 5 years old and Neville’s been dancing ever since.

‘I did nine years touring Australia with Sorlie’s Revue. That was a major company who toured revue and tent shows, to country towns in New South Wales and Queensland,’ explained Neville. ‘They started in the mid 1940s to the early 1960s. They had all kinds of acts. I was only a young fella then but I learned about show business! I had different partners, ladies and fellows, and we went all the way from Newcastle through Queensland. Broken Hill and Cairns were big stops. The tents were huge with a proper stage and a band for all the different acts. Jenny Howard was a big star who came out from England and did several tent shows with us.

‘Then in 1955 I teamed up with two other boys as a trio called the Three Munros. We were just mates, not really related, and we went to England and stayed nine years. We toured the continent, did shows in Paris with Tommy Trinder, the English comedian, along with singers Vera Lyn and also Gracie Fields. We did a lot of acrobatic stuff at that time but then we split up, one of the boys got married and so me and the other fellow went solo for a bit. I then teamed up with another boy and we toured all over England as acrobatic dancers.’

Neville came back home in 1963 and met and marred his wife Dawn who ran a ballet school in Sydney.

‘Funny how time goes by. Your life is like in three sort of patterns. Young, middle age and old age. I started as a young boy touring all over NSW, performed for the prisons and the old peoples homes. Then when I came back from England another boy and I started an act and we did all the pubs, as the hotels were the places to see shows then.’

After an accident which ‘did my leg in for a bit’ stopped him performing, Neville went back to his old job at Homebush Abattoirs. His dance partner got a job performing with Carlotta at the infamous “Les Girls”, Sydney’s first transvestite nightclub.

‘Dawn and I both did ballroom dancing in Sydney as well as teaching. We love to dance. I have had dancing around me all my life.’

Is it any wonder their family are nearly all dancers.

‘Our daughter Belinda now runs the ballet school we started in Taree and all my granddaughters dance competitively. Dawn and I have had hundreds of students in Taree over the years. I worked for the RSL for 14 years and did the choreography for all their weekend shows. They were big events, six dancers in the line up. When we first came up here I was just doing general teaching, mostly tap, but I came across a young fellow in Newcastle who was a brilliant tap dancer, Les Griffiths, and we teamed up and I became an adjudicator and examiner for the Les Griffith Tap Dance Academy which has studios everywhere now. He created all the dance groups like the boys in Tap Dogs. He did the whole syllabus and trains all the teachers too. I’m still with them, been there since 1985.’ 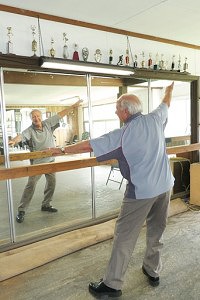 Neville, who is pushing 86, still teaches dance and the walls of the studio at his home in Rainbow Flat are covered with awards and photographs. He loves the creativity of dance.

‘You can watch other peoples’ style and maybe see some little thing you like and so you can incorporate that into a routine. But the ants pants as far as I’m concerned was Gene Kelly… so original. Such a talent. I’m always looking for talent. With all the kids I’ve taught you’re always looking for that bit of magic. I’m teaching a girl at the moment, she’s a brilliant tap dancer, but unreliable with that teenage take-it-or-leave it attitude, when she’s got an amazing gift! Some of the kids win a lot of money in the eisteddfods. One boy I taught has been working in Japan for three years.’

Neville does a lot of shows to raise money for charity. And he’s inordinately proud of all his boy dancers who have gone on to work in show business and become teachers too. He points to a photo.

‘That’s Luke. He’s another Fred Astaire, he is. He’s lovely. He’s just 18, been with me since he was five years old. He’s starting uni soon, but boy is he a magic dancer.’

Not surprisingly his students all remain fond of Neville and he has an extended family of students from over the years who all come back to see him, have a cup of tea and tell him their news.

End Of An Era

While there are not the revue shows around now, Neville feels dance as entertainment was cut off when Hip Hop started.

‘They changed from the style and technique of ballet to the rougher side of life, like rap…all very clever but not my cup of tea! I like proper dancing and nice music!

His enthusiasm, ready laughter and energy belie his years. He loves seeing the little ones go on stage for the first time, all dressed up and full of nervous giggles.

‘The littlies make mistakes but they enjoy it and they always want to go back on stage again. If they don’t try it they’ll never know.’

Neville can be a tough taskmaster, drilling the ladies groups through their amateur dance routines until they’re ready to drop.

He gives a wicked grin, ‘Ah you’ve got to have a bit of fun,’ don’t you! And you know what I always tell my students when they are in a show . . . if the music stops, just keep going and smiling!’