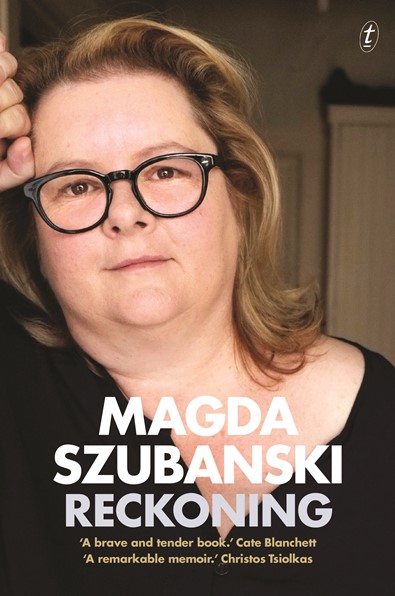 One of the great things about this book is how it emerges why her character, Sharon,  was such a loved, essential person in the dynamics of the Kath & Kim series on TV.

Not only was she a funny, but also decent,  forlorn, and a downtrodden foil to the exaggerated confidence of Kath and Kim.  She was vulnerable, melancholy, constantly on the outer in some way,   sports mad and fat.  Somehow everyone could identify with her, and you don’t forget the subtlety of the darkness Sharon lived with.

As we now know, that was both off and on screen. And part of her reckoning in this autobiography.

Magda Szubanski is a great actor, and this important book about her life shows she is also a great writer.  It is a major work, the writing flows easily with humanity and wit.

It is an extraordinary story, with many dimensions and nuances.  She was for a great part of her life an unhappy, fearful observer of the people and lives around her, but it is written with such grace and courage the words sometimes take your breath away.

One central figure is her father, a Polish man with a violent past. Magda knew that  Zbigniew Szubanski,  known as Peter,  an upright, highly moralistic  man had killed many people in Poland and been part of ruthless acts.   She thought and was horrified that he had been a Nazi.  Later she discovers he was a member of the secret Polish Counter-Intelligence, killing both Nazis and Polish sympathisers – an assassin. He had started in his mid teens, horrified at the treatment of Polish Jews.

The dissonance of this “stone of madness” in him, coupled with her feelings for his  “gentle heart”  and  his quiet,  kindly, intelligence, trouble her to this day.  He had a rigid sense of right and wrong. He was less able to be sensitive towards her Irish mother, who had depression, and also a warm cleverness .

Importantly Peter endlessly helped his daughter  become a  seeker for knowledge and self. “You have nothing to fear,” he told her.

That thread is just one of many woven into this lovely book.

Renowned literary critic Peter Craven has written of the book as a “panorama of a world of vibrant struggling souls…..with an intense, vivid inwardness.”  He also writes of her superb ability to glimpse the “murmurs of the heart with women.”  High praise from a leading reviewer.

As well the book is full of fun and sniping at almost everything, including herself, the church, her weight, school where she was dumped by the cool girls, and  the deadening effect of suburban conformism, feminism, travel, the music and TV worlds and her own family turbulence. At one stage, aged 6,  she became obsessed with the Brady Bunch.  She wanted a normal, unfazable family like that.  It was “a survival manual” she writes.   She wanted to be Marion Brady.

Later, we find out that Steve and Terri Irwin adored each other, a merging of two great souls.  Something she didn’t know before working with them is that Terri was engaging, funny, and generous “with just about the bawdiest sense of humour” Magda had ever come across.

Another snippet: after loosing 29 kilos in about a year with Jenny Craig, Magda was delighted but she also writes “I became aware of myself as a decorative object: a bauble.”

Magda very nervously told her parents she was a Lesbian when she was 32.  They accepted it, her lovely Mum only commenting that she needed to get a girlfriend, “someone classy like yourself.”  Noting It was another 15 years before she made it public in a TV interview.

Now, she has said in an ABC interview, she has at last found some solid ground and feels “fricking fantastic.”

So is her book.

“Reckoning,” by  Magda Szubanski, is published by Text.