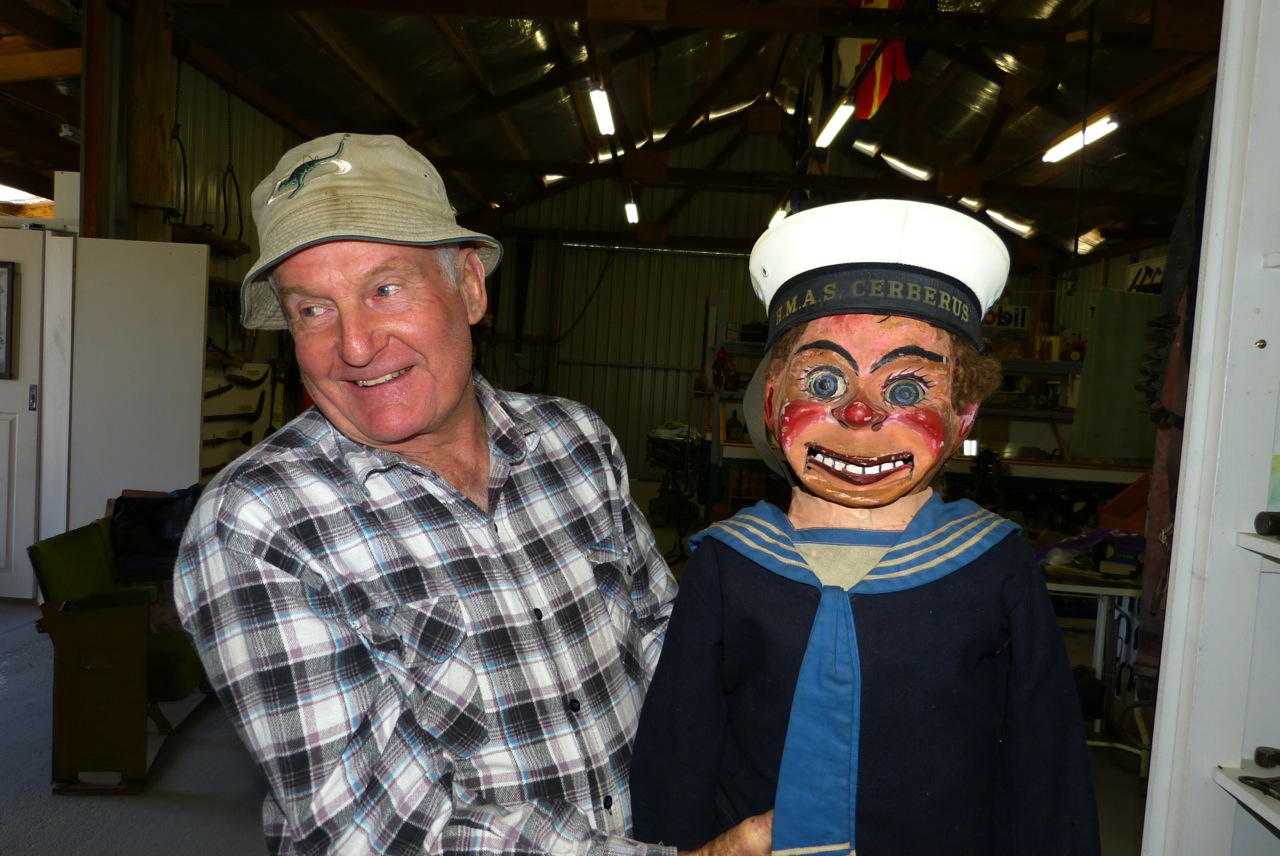 Do you ever wonder what some men keep in their big sheds at the back of the house?

You see them as you pass farms and homes and imagine they house machinery, an old car, some stored feed and grain or paraphernalia from an abandoned hobby perhaps.

An invitation from Don Schmitzer and his partner Kate Clarke to visit their “shed” at their home in Pampoolah was a huge surprise.

Step inside and you step into the past. Don and Kate have set up an extraordinary museum! You name it, they’ve probably got it. Replica pioneer cottage kitchen, the old bakers cart from Taree, full size pear diver suit with metal helmet and hose, a ventriloquists doll named Charlie, carousel horses, old farm machinery, the old telephone “party line” exchange from ? and looping overhead a working vacuum message system. Remember when receipts were put in a canister and they whizzed upstairs or across the emporium to be returned with correct change and a docket? It’s a place the size of two tennis courts (?) where you could spend hours knee deep in nostalgia. Many things are unidentifiable to some of us. ‘What’s that box with the holes and numbers?

‘That’s the number draw for the lots of land for solider settlers after World War One where they drew lots and some got decent land and others land that was hard yakka,’ explained Don.

Don started collecting after he retired.

‘About twelve years ago I started collecting rabbit traps and hung them on the shed wall. ‘I never collected things as a kid. No one had any money to just collect things to hang on to,’ he explained. ‘I did collect cordial bottles and empty sugar bags from the produce store as you took them back and got threepence each for them.’

Born in Taree, his dad had a milk run dad picked up the milk from farms at Glenthorn.

‘I was youngster we went across in the punt where the Council Chambers are  now. We took the horse and cart and came back over, put the milk in smaller cans and then delivered it.’ In laer years he used to pick up a couple of cans on a pushbike then eventually he got a ute and delivered around central Taree and the top end of Victoria Street  shops and houses. ‘We had set runs, we couldn’t go far as there was no refrigeration. The horse knew where to stop. And of course no milking machines then, all cows were hand milked. And in those days they did it twice a day. Can’t remember when pasteurization came in, that extended the life of the milk  and people got ice chests and refrigerators and so it all changed.’

He left school and got an apprenticeship as a carpenter at Taree tech college and after five or six years became a builder.

‘It was great training at the college,’ he says enthusiastically. ‘Now days I question what the kids are  being taught frankly, and how they’re using it. It’s great to get re-educated but you hear of people starting a course then going, “Oh I don’t like that,”  so they go back again and do a different course, and seem to spend their life getting educated and I don’t know if they ever use it! Kids go there to meet the requirements but never seem to get a job, but they still get government support!’

In his twenties Don went into partnership with another builder to do renovations and build houses which he did for twelve years. Then I bought a couple of properties and developed them and after that I’d had enough so I got out of building. I ran a few cattle and then I got the collecting bug. It’s something Kate and I like to do together, travelling around the country, going to antique fairs and hunting down things to buy. It’s good to have a hobby you can both share and enjoy.’

They paid attention to older items, sometimes restoring them and researching their history.

Kate adds, ‘The things we’ve collected were always very well made and looked after.  Not like today’s throw away society. We feel the things in our museum have come from homes where they were treasured and had been kept.  But now no one knows what to do with their antecedents belongings. We’ve met people who have great collections, as we are in the collectors club. But they keep them in boxes packed away so no one can see them. We think that when we were travelling around the place if we’d seen a museum like this we would have thought, Ooh wow. Of course the Wingham Museum is very well done and Barbara Waters if very good at keeping and collecting local history which is so important.’

So Don and Kate open their private museum by appointment only for groups and the community as a public service. There’s no fee and it’s proving a popular stop for clubs and groups.

Don gives very entertaining talks to an audience perched on the old seats from the now lamented Terrace Cinema in Tinonee.

is itemised and written down in books.
‘We don’t have a computer,’ says Don. ‘I couldn’t get interested in them. I can understand the good points of having one but people say to me I’ll send you an email but I want to know that the person reads it. If I want to know something I’ll ring you up and talk to you. Then we’re both clear and know what’s what. Rather than sit and wonder did they get or read an email. We don’t even text on our phone. We ring people up.’

Adds Kate, ‘We have a debriefing each evening. That’s a red wine at sunset to catch up on what we’ve been doing in the day. We discuss things and if we don’t agree then we don’t agree. But its clear communication. Much nicer than texting!’

Don’s shed started to get so chokka when a building he owned in Taree became available he set up the Olympia Antique Solutions where collectors can rent a stall space and sell their collectibles. ‘Through our involvement with the PCYC antique fair and the Collectors Club we realised there was a need for a space for people to sell their excess collections. And some people get to a stage where they decide to downsize into a flat or one passes on and the family decide they should get rid of everything. So some people bite the bullet early and say I’ll downsize while I can control it.’

He adds, ‘My kids are partially interested in our collection. At that age I wasn’t interested in collecting old stuff. There are some young people who might collect something but don’t have time to go around looking for things. We find it a great hobby in retirement.. and of course you have to have some money to buy the goodies you see.’

Don admits they still get excited if they find something unusual or different.

‘We got shoe shine box the other day. Remember when you’d stop to get your boots polished in Sydney before getting on the train? Or in a posh hotel?’ His eyes light up with enthusiasm.

It seems Don, and Kate, are not over the collecting bug just yet.