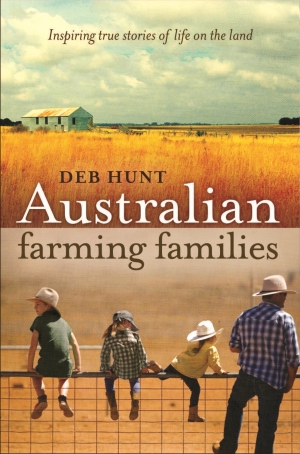 As a teenager, my summer holidays were spent jillarooing on a huge property on the Queensland border, where I learned both the enchantment and brutality of large scale pastoral life. The heat, the flies, the endless plains, dust, and how to outrun a big angry goanna.

Then I was just an observer, later on I became a Failed Farmer’s Wife.

The second farming experience was with a city husband and a couple of kids. He set out to make a fortune growing poplars for matchsticks, a tax break encouraged by the government. We also had cattle. The poplars grew well on good river flats, then were ruined by rust fungus. The cattle developed blackleg, a blood poisoning, never known in the area before.

Twenty years and another husband later it was 2000 goats on marginal land nine hours out of Sydney. We were
going to breed them up and make a fortune selling their cashmere wool. Goats get over any fence, but the problem wasn’t ours getting out. It was the feral rams getting in and having their wicked, wild brown ways with our precious white nannies. I learned to be a good shot. Our barley crop died for lack of water. And we couldn’t compete with Chinese cashmere anyway.

This book – Farming Families in Australia – travels across the proverbial wide brown land and talks to eight families who are more than heroic as they deal with the cruel realities of drought, distance, flooding rains and simultaneously all the complexities of any family life. Serious illness, death, money, marriage, intergenerational tensions, deep disappointments, accidents, high hopes and achievements.

These eight families are tenacious, brave, tough as boots, kind and tireless. Without taking that away from them, sometimes a reader might feel their lives are a bit too extraordinary, their resilience too remarkable, to be the whole story. Perhaps that’s churlish, and a result of reading too many reports of farmers being forced off their land, or living in dire and meagre circumstances. The figures are rubbery, but there are many farmers leaving the land, big corporations industrialising agriculture, cattle in huge feedlots, mining giants at the gate.

The book deliberately sets out to be inspiring as the author, Deb Hunt, gives each of eight families a chapter on “the Australian spirit at its best” as the blurb says. It delivers.

For instance, just in bare bones: Ian and Merry Jackson take on a huge property, and have three kids in six years, and in shearing time might get four hours sleep a night. A flood destroys their home. Later a 10 year drought is followed by l0 inches of rain in half a day, and paddocks are inundated. At one stage, hugely in debt, interest rates rise to 18%. Sheep were 20cents each in the 1970s years later they sell for $50 a head.

And always, always there’s the weather, the animals, human nature and human tenacity. Unless you’re born into it, you’d have to have rocks.