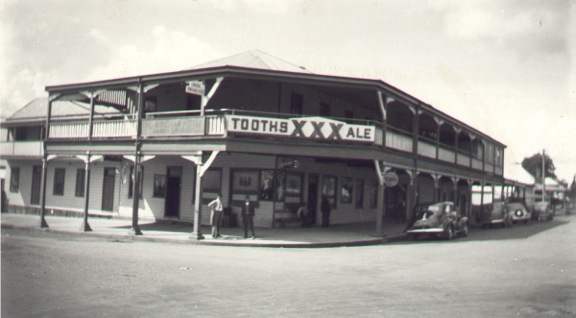 The old Wingham Hotel, otherwise known as the ‘Bottom Pub’. It is no longer standing.

What will Wingham look like in 20 or 40 years’ time? Will it be a bustling, thriving country community, a sleepy backwater, or virtual ghost town? Or will vestiges of its long history be gone and replaced with a modern township of slick cookie cutter commercial franchises like hundreds of similar towns? Bit like those hotel chains where you feel you could be in any city in the world, so similar and familiar are the bulk furnished, mass produced surroundings.

What do you want for Wingham?

You can have a say. People are weary of token and empty gestures from a council who really doesn’t get what community consultation is all about and have their own agenda and plans no matter what we think.

Wingham-ites are tired of being patted on the head and told what’s best for them.

How can the town move forward with a long term plan while the council hiccups from one idea to another, achieving little and antagonising half the populace?

Pulling down heritage buildings while promoting Wingham as the ‘Heritage Town’ makes no sense. The loss of the Palace Emporium years back and the Wingham Hotel grand stables shed more recently, remain a great tragedy.
Why is the council hierarchy surprised at the uprising over their plan to sell off parks and open spaces? This is everybody’s backyard.

And even more sinister was the further mooted plan to sell off ‘old’ and unaffordable buildings in Wingham like the courthouse, the Wingham Pool, Cuddlepie Early Childhood Learning Centre and even the Town Hall – though it would be “over my dead body” declares Lt. Col. (Ret) Eric Richardson. Let’s hope that thought bubble has been shot down in the corridors of council.

One has to also question the commitment of decision makers who do not live in our valley and are relatively new to the area.

People who move here because they love the setting, the scenery, the people and the lifestyle choose to make a commitment and become part of the community. Those who simply work here as a career move with no intention of staying and investing in this area surely can’t have the same commitment.

There is a very inspiring organisation in the US, initially a privately founded foundation, called the Orton Foundation’s Community Heart and Soul. They have devised a sophisticated program for communities to develop bring out the best and grow economically. They describe it as:

“… reconnecting people with what they love most about their town and translates those personal and emotional connections into a blueprint that serves as the foundation for future community decisions. It’s a barn-raising approach to community planning and development designed to increase participation in local decision-making and empower residents to shape the future of their communities in a way that upholds the unique character of each place.

“The Orton Family Foundation believes that the strength of a community lies in the hands and the hearts of the people who live there, and that the community’s heart and soul is the common case that they will rally around. Communities that acknowledge and value their heart and soul are able to take action to strengthen it …That there’s something special about every town – the old downtown, the pastures or woodlands, a get-it-done spirit, or an everyone-is-welcome ethic.

Instead of keeping the community out of the picture why don’t our leaders include a “heart and soul committee” to have input and help make decisions which affect all of us. (The Orton Foundation offer a lot of free advice and help.)

Why do we not think of upscaling and aiming higher rather than the defeatist attitude of slash and burn, and go down-market? The Manning Valley has a lot to offer. But unless we fight to improve our area and keep and develop our towns and villages as we want them to be we can lose all we love about this area.

Like too many other places we are threatened by the effects of coal seam gas and fracking at Gloucester which could destroy our water, a struggling economy, a lack of funding for roads and bridges (just for starters), a lack of opportunities for youth employment, a lack of marketing and promotion of our area and a myriad other issues our council has to deal with.

But surely there are more creative and positive ways to move forward? The apparent Mexican standoff between council executives and some councillors, between the mayor and our state and federal members, is not proving to be productive judging by the lack of any significant government funding for the Greater Taree City Council.

It is easy to criticise and lay blame. But being defensive and secretive doesn’t help. We need a council that is genuinely prepared to listen, to consult and take constructive outside ideas on board.