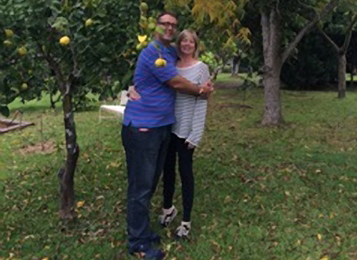 Jane MacKenzie is a new arrival to the Manning. She and her husband Neil are the proprietors of Mansfield on the Manning Rural Retreat and many of us have enjoyed delicious food from Neils on Wheels travelling foodie van. Jane, who is English, comes from a career in marketing and promotion in London. They chose to move here and start a business because of the beauty and potential for tourism here. Jane has some thoughts on “selling” the Manning.

“It’s almost a year since we moved to the Manning Valley. We left a dull London on 31st March 2014 and arrived in sunny Sydney on 2nd April – then it was an excited drive to our new home – Mansfield on the Manning in Tinonee.

Many people have expressed their surprise at our move direct from the hustling, bustling hive of activity that is London to the peace and tranquility of Tinonee. But what’s not to understand?

Over our last couple of years in London I had become increasingly despondent about how ‘selfish’ people were. Every day I’d see hordes of commuters, heads down, engrossed in their mobiles, oblivious to anyone else around them. Nobody talked to anybody else, nobody looked out for anybody else.

Here in the Manning Valley, with its beautiful unspoilt parks and reserves, its stunning beaches and rivers, there is a feeling of time to enjoy life and have a chat with your neighbour or a passer-by in the street. Australia is known for its friendliness and laid back vibe, but here it seems to happen so naturally – as the tag line for Manning Valley tourism says!

Neil and I have wanted to run a boutique accommodation for years. We’ve travelled extensively around Europe and always searched out beautiful but low-key places to stay. We’d got a clear idea of the sort of place we wanted to run – a relaxing, stress-free retreat, with high quality accommodation and a ‘nothing is too much trouble’ attitude to service.

Once we’d made the decision that the time was right, and agreed that Australia was the destination, we set out to look for properties within a three-hour drive of Sydney. We spent months trawling the internet and joined every real-estate site in NSW and spent every night researching different destinations.

By June 2013 we had a shortlist of three properties we wanted to see in NSW – two of them in the Manning Valley. We booked a one-week trip and set up the various appointments. By day two of our trip we had fallen in love with the Manning Valley – and specifically – Mansfield on the Manning.

We came back out in October 2013, to see Mansfield again and to spend more time in the area before committing to the big leap! We were totally convinced by the end of our trip – we’d spent time at Old Bar Beach – and most other beaches in the area – we’d seen Ellenborough Falls, explored the Three Brothers region, been to visit Forster and Port Macquarie, met the flying foxes at Wingham Brush, tasted Comboyne cheeses, sampled many of the local wines, visited some of the weekend markets – and enjoyed the hospitality of the area.

Having been here a year now, I am still surprised by how much of a hidden secret the Manning Valley is to many Australians. We’ve had guests who came across the area by chance – travelling up the coast from Sydney and needing a one night stopover – who have been so impressed with the area that they’ve stayed an extra night – or two – and stopped on the way back too! Neil’s family from the Snowy Mountains have become smitten with what this area has to offer. Friends from Canberra and Brisbane and Melbourne have all had such a great time that they are coming back for longer stays to explore more. All think this area an amazing secret!

Yet I get a sense that some people are apologetic about the area – have maybe forgotten all the good things and let a few niggles cloud their view. I love what is being done by the Tidy-up Taree team and am inspired by the Thumbs-up Manning Valley Facebook page. Some of our local businesses are doing such a good job to get this area on the map. Those of us who live in the area need to celebrate it and become living, walking adverts – selling the Manning to everyone we meet. I’m very happy – and proud – to take on that role!”

(Click on a thumbnail below to view the gallery carousel.)